So who would have thought a summer veggie sandwich was on the top of my list?! 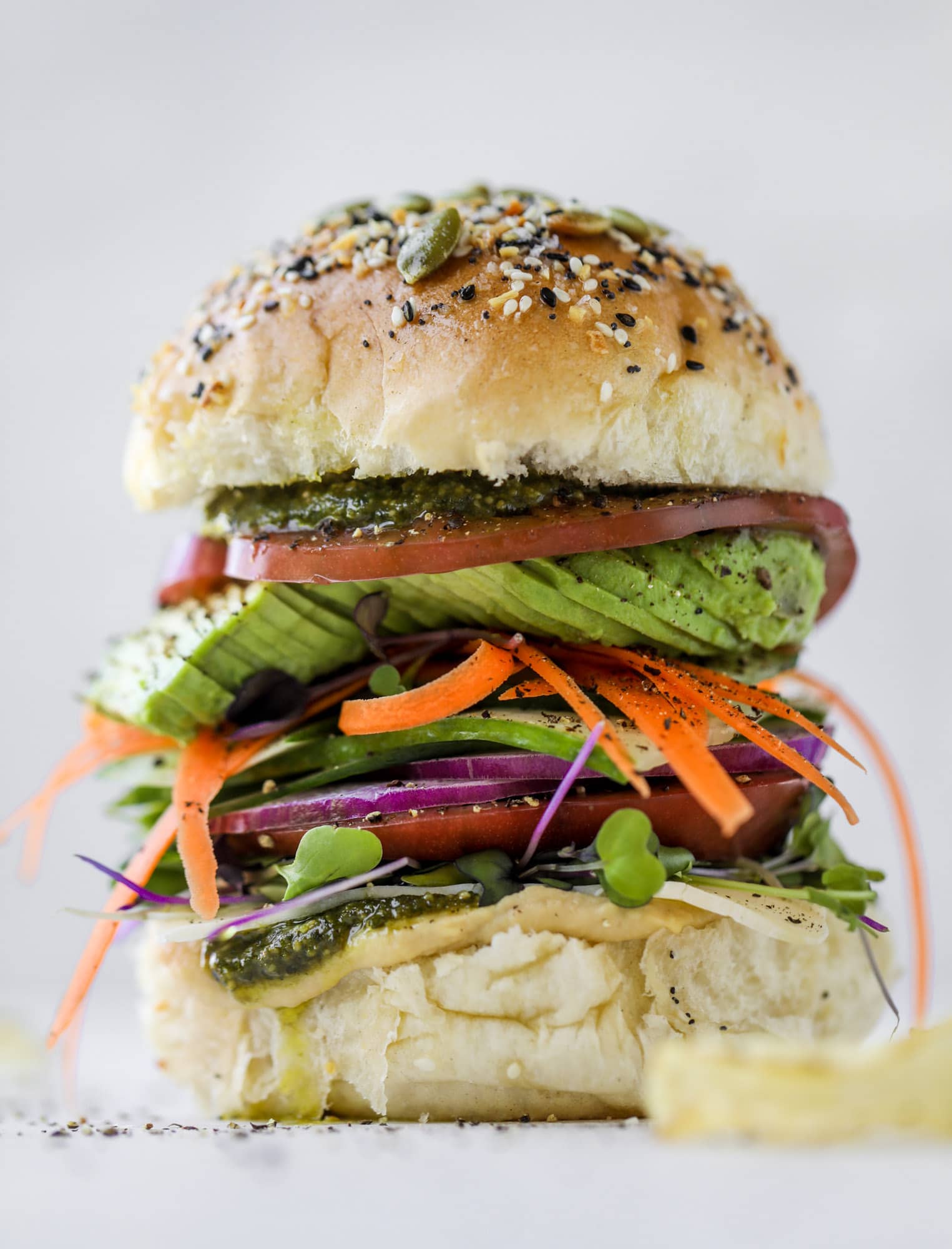 June gloom be gone! Piling veggies and chips high on a hearty, seedy bun with lots of layers of hummus and pesto? And creamy havarti cheese? It’s the only way to go. I may sound like a crazy person, but this isn’t the first time I’ve recreated a meal that I’ve had at Nordstrom café. We are obsessed with going anytime we are at the mall – the food is so good, it’s kid-friendly, it’s fairly quick too.

Last year, I made these ricotta tomato jam jars. They are SUPERB. You guys love it, my family and friends request it, and it’s such a simple snack to make but one that’s really impactful as an appetizer.

I’ve also made their crispy cauliflower dish with hummus. Lacy and I get this every single time we go. I basically want to order two plates of it and eat it as my meal. SO good. So a few weeks ago, it was just the kids and me and we stopped in for lunch after running errands. They had a veggie sandwich on the menu and it just sounded SO good. And that’s obviously never my first choice. Like, ever.

And then, it was so good. Hummus and Havarti? Yes please. Those two things are foods I’d have a pretty hard time ever saying no to. I figured if they were with vegetables, I’d probably love it. 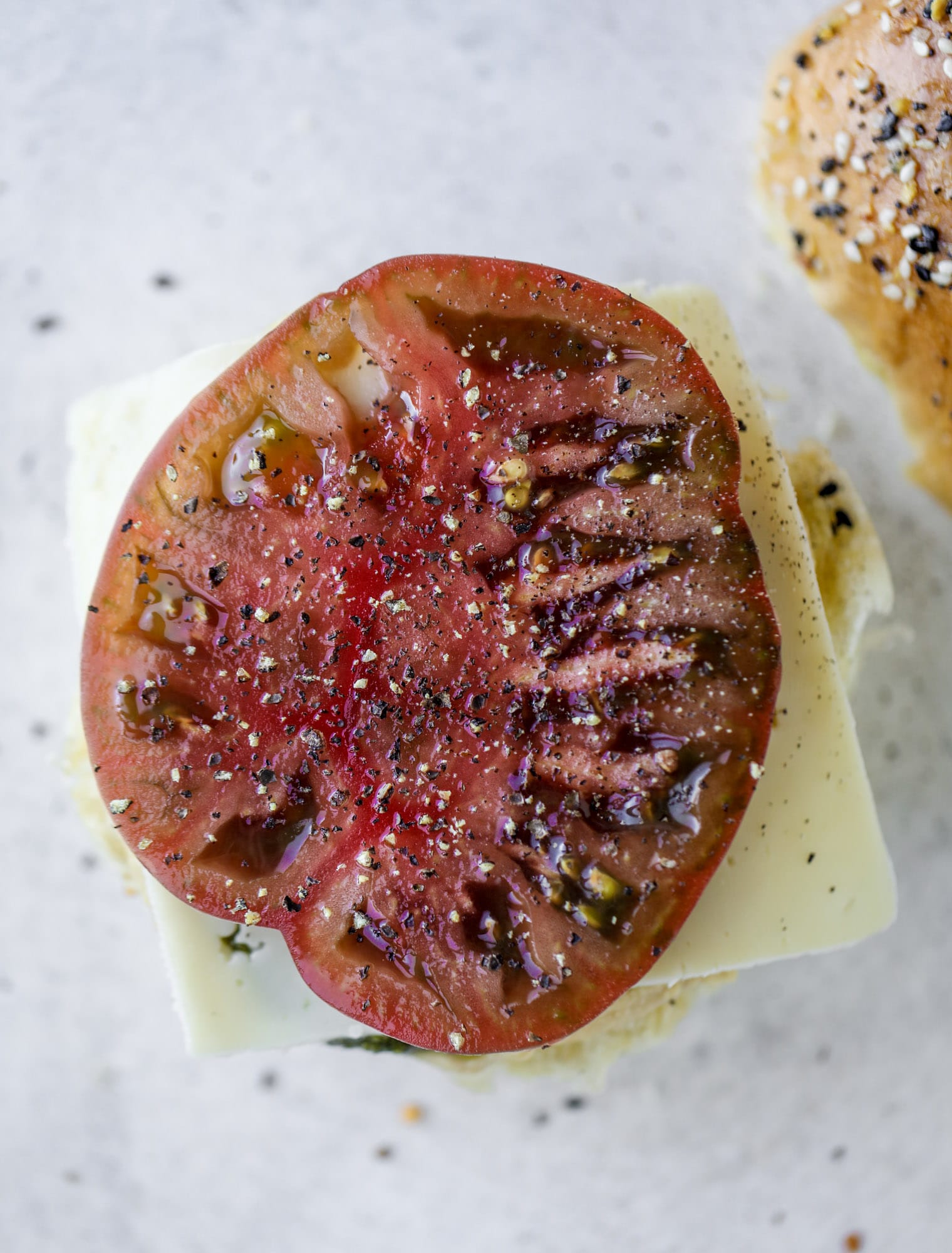 I made my own version shortly after we got home and let’s just say it’s been on major lunch rotation. This is huge huge HUGE for me because I don’t really care for raw vegetables yet. But something about slicing them super thin like this, and then layering them between thick blankets of hummus and Havarti cheese? Amazing.

Oh, and of course I added in pesto!

Because it’s summer and I just can’t help it. Pesto makes everything better. 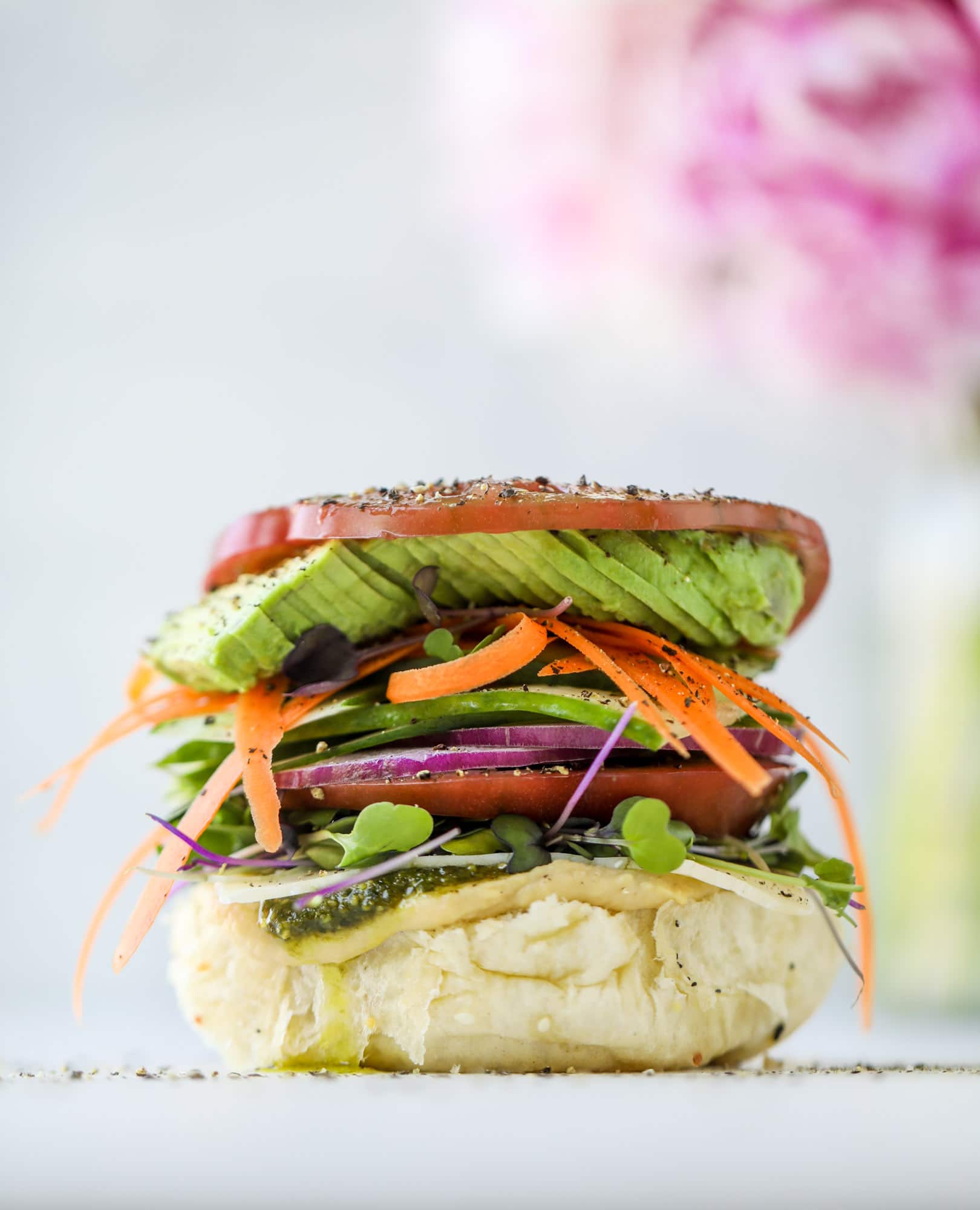 Obviously, the bread is a game changer here too. I suggest finding something hearty and seedy, a multigrain or sourdough (or, uh, a multigrain sourdough!), something that can hold all of the vegetables really well and not disintegrate between the juices and the hummus and pesto. I’m almost never a bun person – and always a bread/toast person – but I wanted these to be portable and cute and like a veggie sandwich cloud. 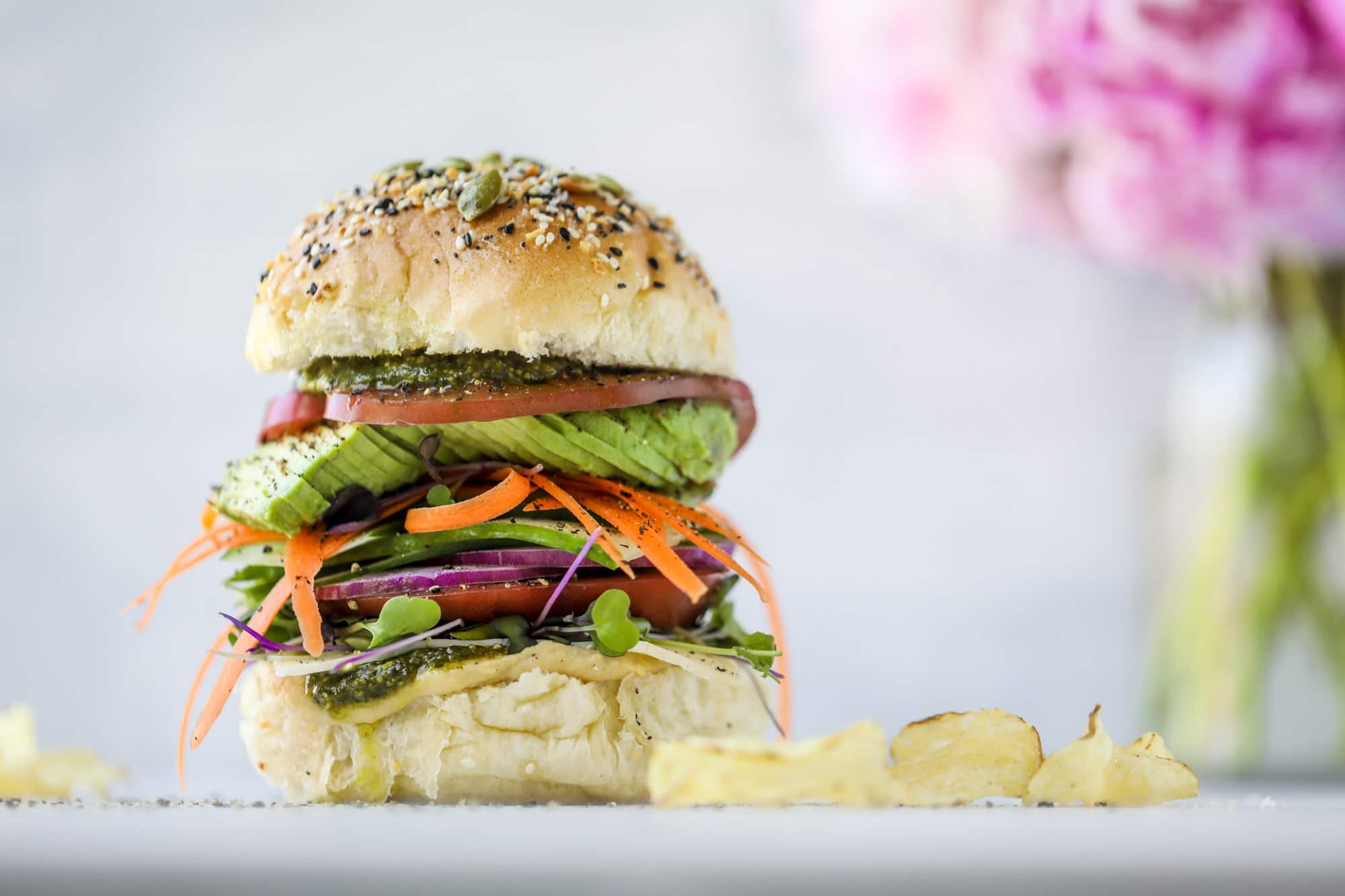 While I have a rainbow veggie sandwich in The Pretty Dish, it’s a mix between roasted and pickled veggies (and to die for), nothing as simple as slicing some raw ones. And I never thought I’d actually make something like this and ENJOY eating it, but here we are.

Is the world ending?! This summer veggie sandwich is full of creamy hummus, fresh pesto and havarti cheese along with tons of sliced, fresh vegetables. Best lunch ever! 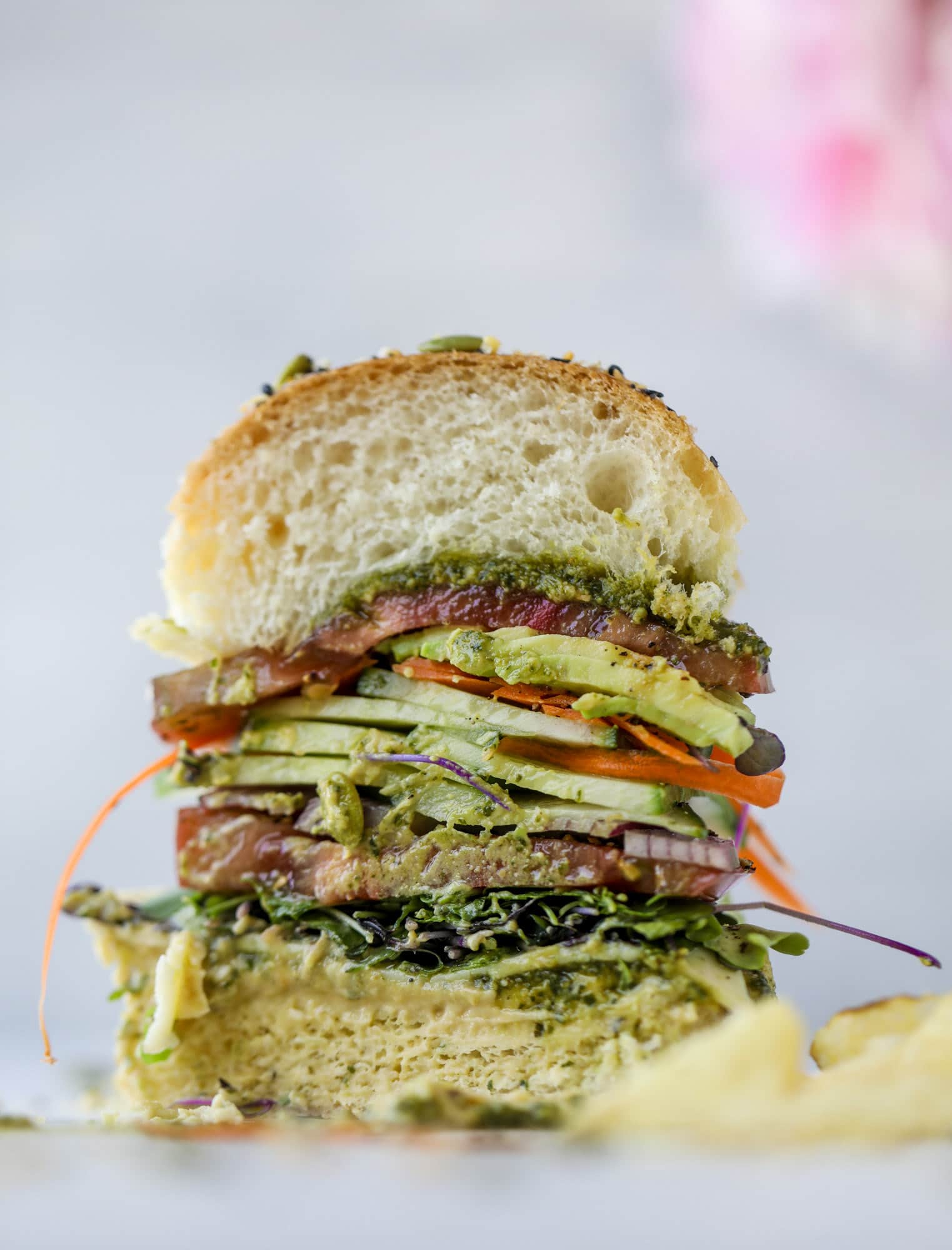 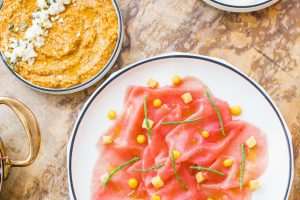 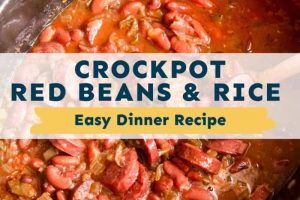 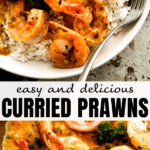 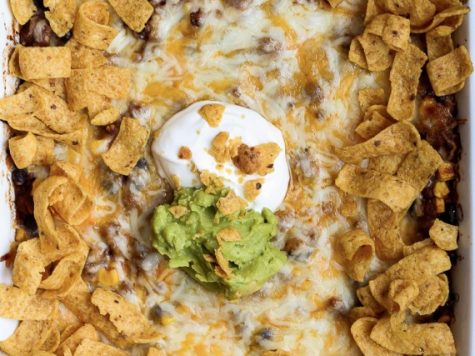 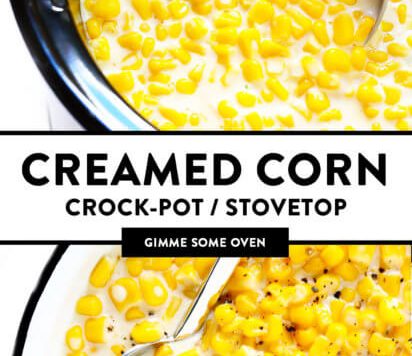 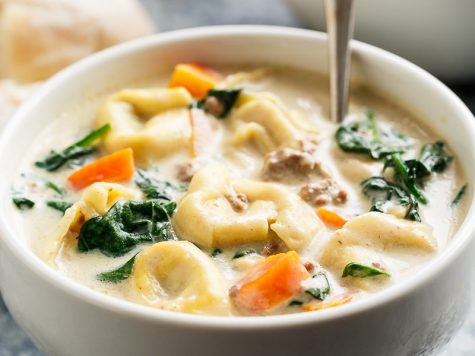 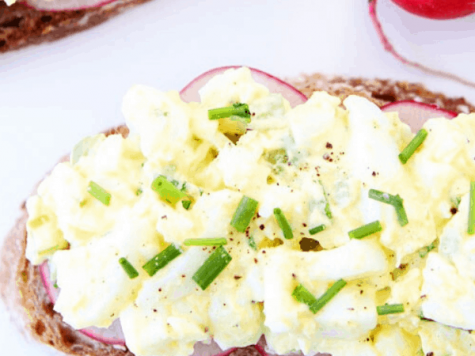 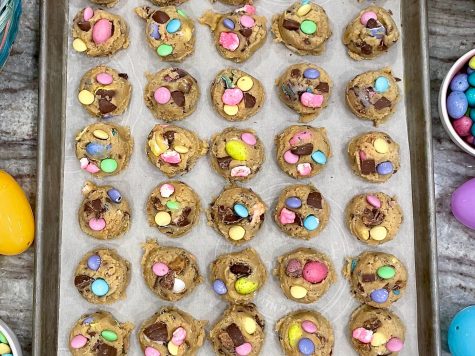