Don’t even think about getting takeout tonight when you can make these Shrimp Tacos with Slaw in just 20 minutes. Chock full of honey buttered shrimp with Cajun seasoning and topped with a creamy taco slaw, you won’t ever think of tacos the same way again. 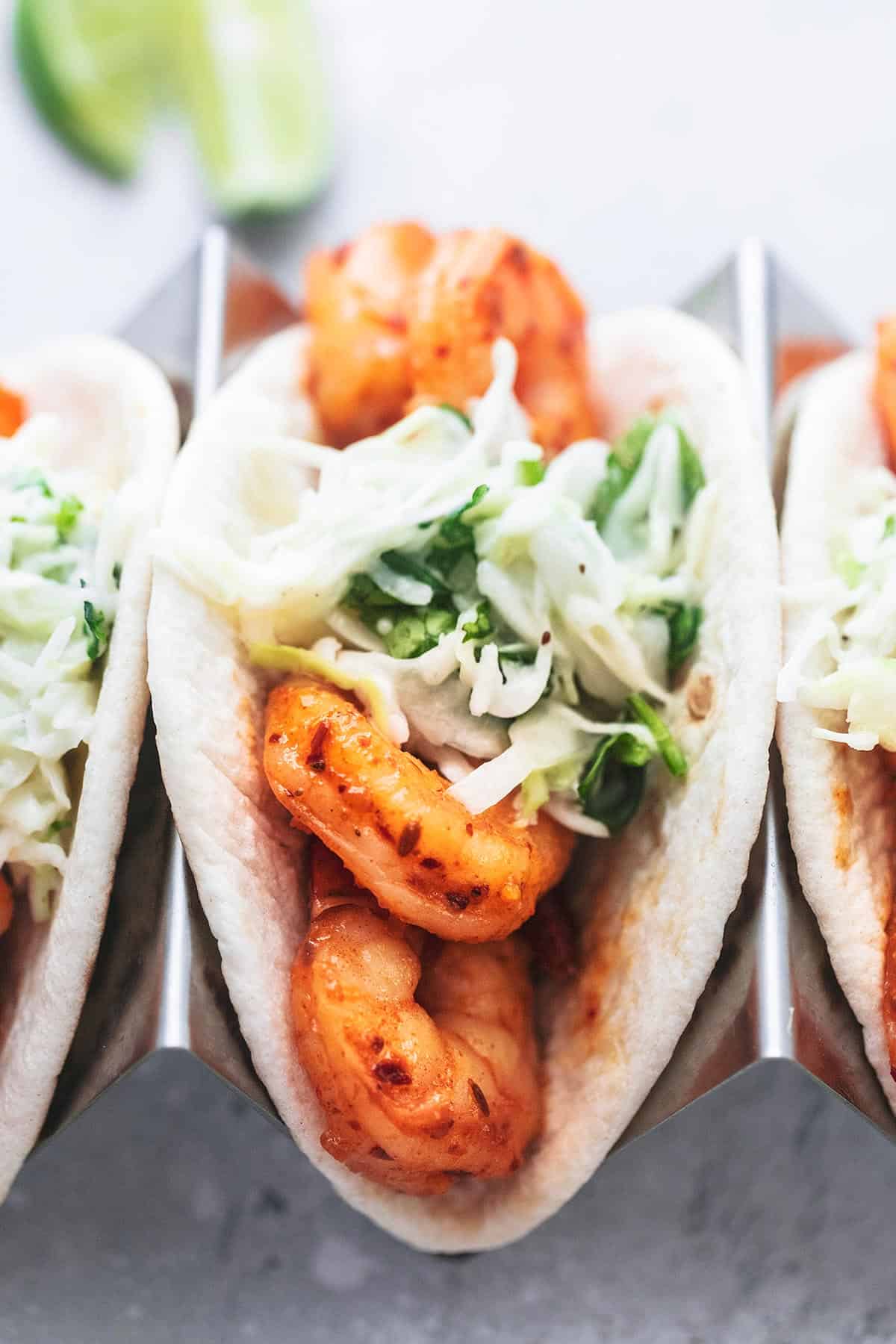 Hi friends! You know what, it’s winter. It’s winter and today I’m over it. So, to combat that, I’ve decided to pretend like it’s summer, or spring at the very least. And what that means is that I’m foregoing the comfort food in favor of something spicy, something savory, something I’d want to eat out on the deck with the sun in my face and friends and family talking and laughing and…well, I’m not sure if this little scenario of mine is making me happy or sad at this point.

What that run-on sentence all meant to say is that, I guess, I’m trying to will my way into some warmth and if I have to start with Cajun shrimp tacos, then so be it. I think if you try these, you’ll also find yourself pining for summer, or pretending it’s summer or maybe just happy that you’re able to stuff your face with a fabulous shrimp taco. I don’t know. I think I’m delirious from the (pretend) sun. 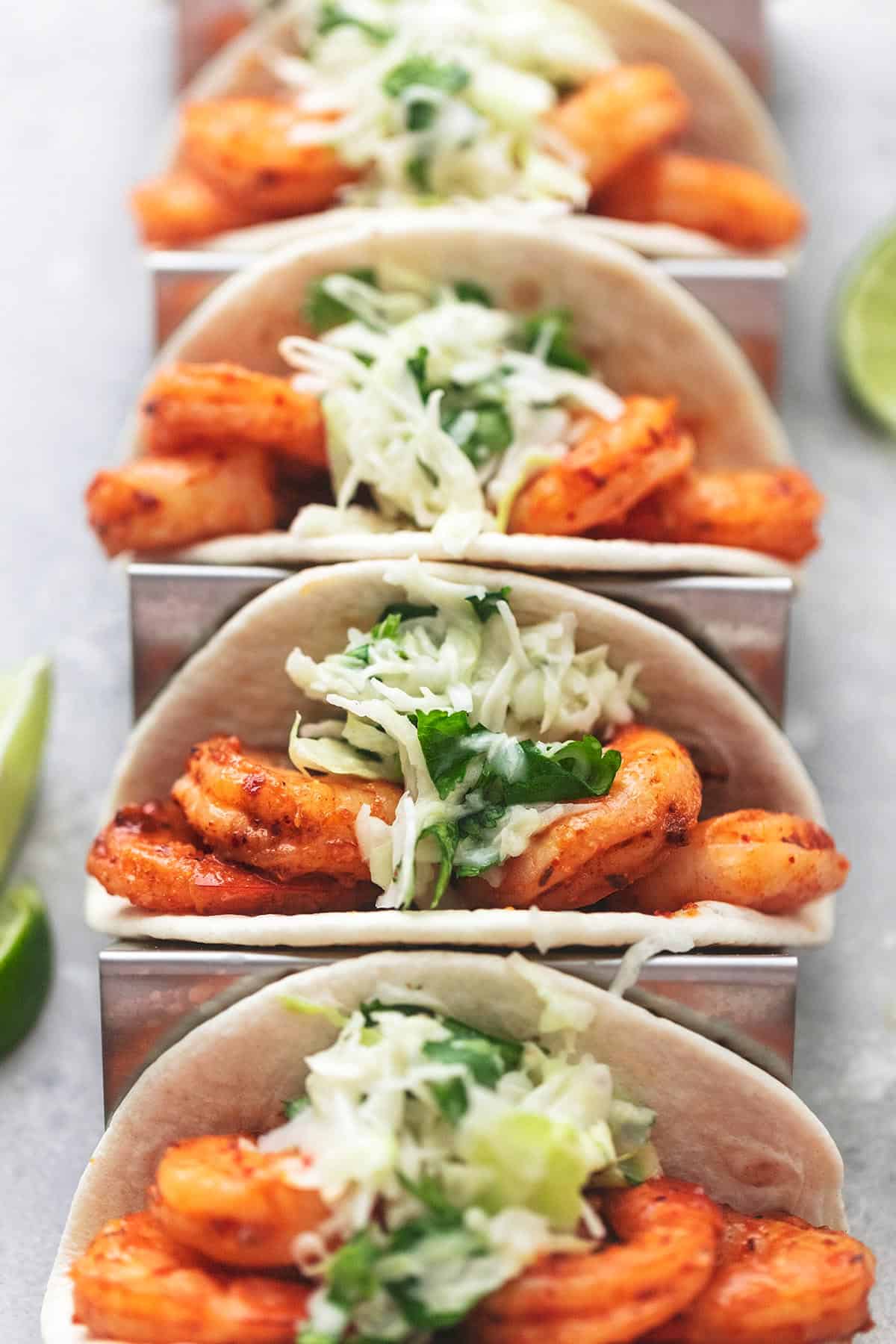 WHAT INGREDIENTS DO I NEED FOR SHRIMP TACOS WITH SLAW

The ingredients list is super simple! Are you ready for this (you probably don’t even need to write this down/print it out even).

HOW DO YOU MAKE SHRIMP TACOS WITH SLAW?

I know, I almost always say that the directions for making my recipes are easy but really, truly, this is about as easy as it could possibly get. Are you ready? Here goes!

First, you prepare the slaw by stirring together mayo, lime juice, salt, sugar, and cilantro and pour it over the shredded cabbage slaw. Toss to combine, cover, and chill till you’re ready to top these Shrimp Tacos with Slaw.

Next, get your shrimp together because we’re going to cook it up in that delicious seasoning. First, melt butter in a large skillet set at medium heat. Stir the honey and Cajun seasoning into the butter, then add the shrimp and stir over medium heat for 3-5 minutes until opaque.

Now it’s time to put the whole shebang together. Grab a tortilla, add 3-4 shrimp, depending on their size, and top with creamy cabbage slaw. Yep, it’s that easy! 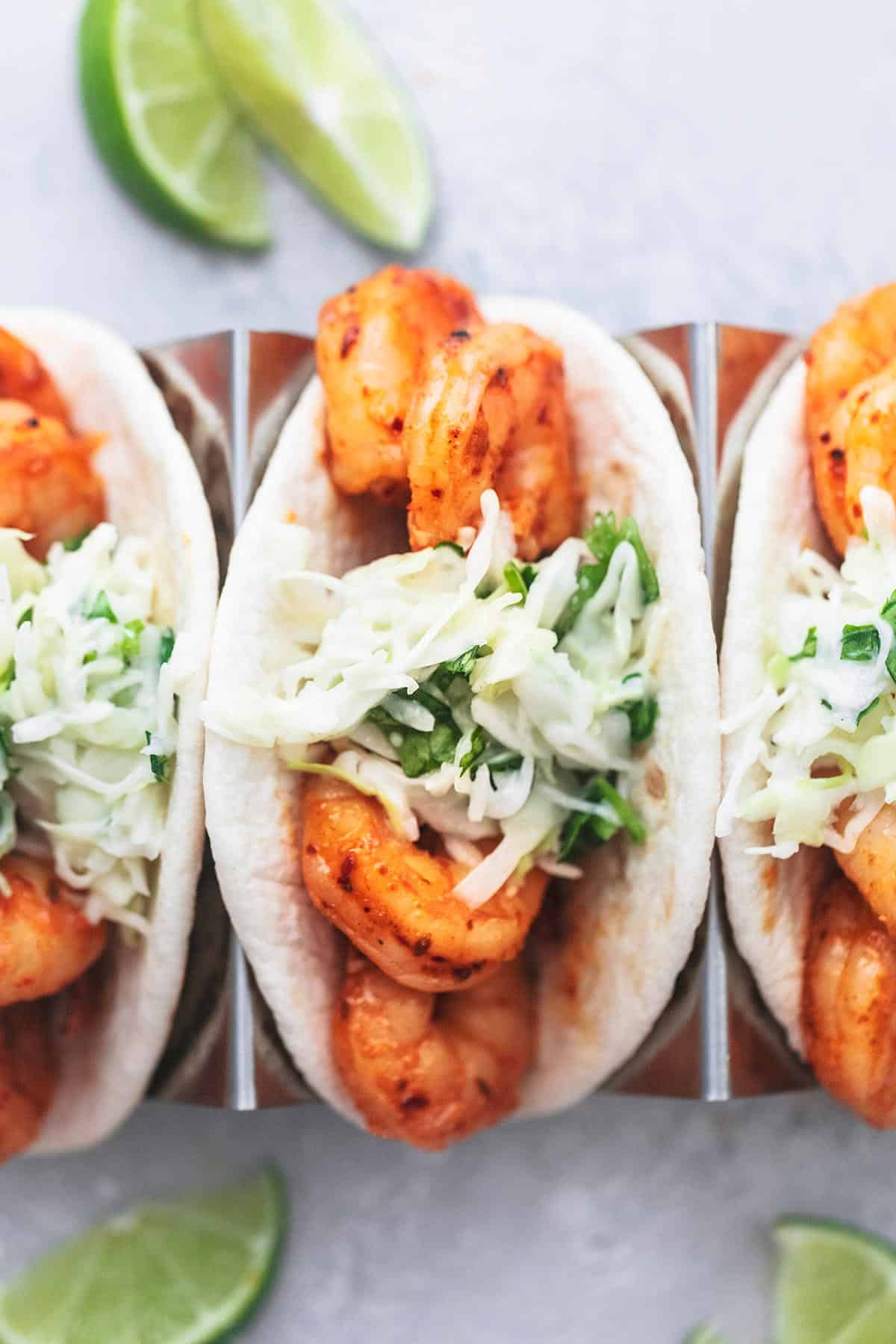 HOW DO YOU MAKE YOUR OWN CAJUN SEASONING?

To say I’m slightly obsessed with Cajun seasoning would be an understatement. I use it on just about everything I can, from Cajun shrimp and rice, to Cajun salmon, and even with sausage and cabbage!

Like Italian seasoning, I like to have a bunch of my one DIY Cajun seasoning on hand for when I’m overcome with the need for a spicy, flavorful dish (ahem, Cajun Shrimp Tacos).

Wanna make it too? Let’s do this.

WHAT DO YO PUT ON SHRIMP TACOS?

Typically, I like to pile on the taco toppings whenever I get the chance. But, I think these speak for themselves, pretty simply and deliciously. I have topped them before though with a few ingredients that I think play rather well with the shrimp and the slaw, like:

WHAT’S THE DIFFERENCE BETWEEN COLESLAW AND SLAW?

The main difference between coleslaw and just plain slaw has to do with the cabbage. Coleslaw is basically a cabbage salad. It can mean one or many varieties of cabbage thinly shredded in the same bag that you’d then add a dressing to.

Just plain “slaw” can feature cabbage, but can also feature just about any veggies you can shred or jullienne and put in a bag, like carrots, broccoli, Brussels sprouts, and snow peas.

Either variety will work in this recipe with the slaw dressing, so you decide which you like best. 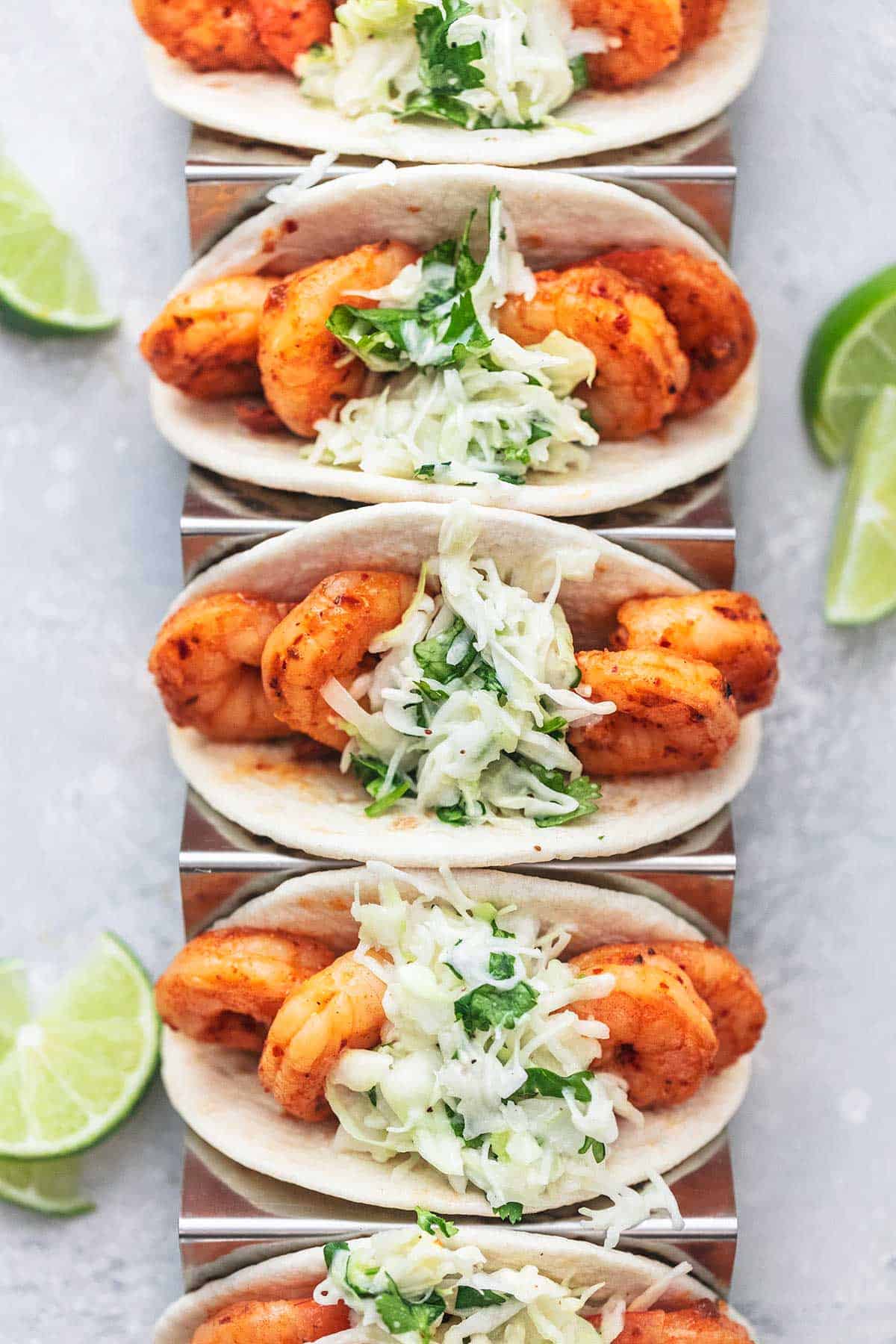 Don’t even think about getting takeout tonight when you can make these Shrimp Tacos with Slaw in just 20 minutes. Chock full of honey buttered shrimp with Cajun seasoning and topped with a creamy taco slaw, you won’t ever think of tacos the same way again. 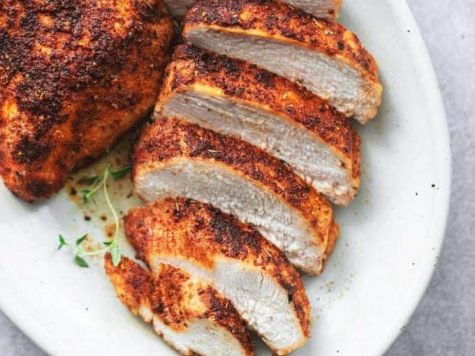 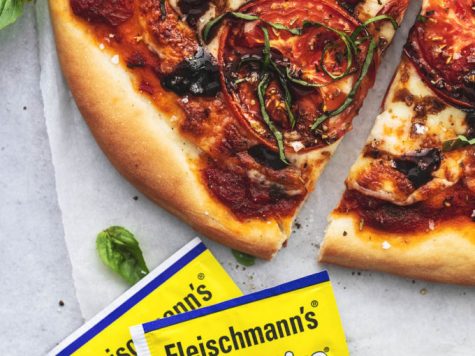 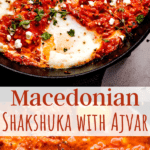 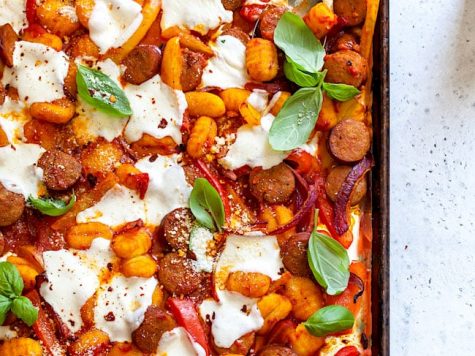 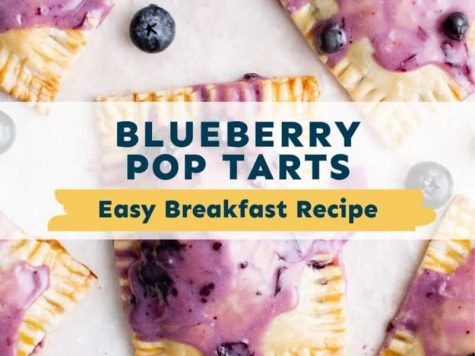