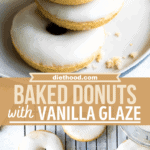 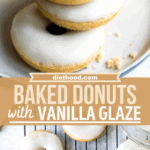 You have never had a baked donut as good as these Cinnamon Baked Donuts with Vanilla Glaze! Spiced with a bit of cinnamon and topped with a sweet vanilla glaze, these donuts are the best I have ever made!

Is your mouth watering while just looking at these Cinnamon Baked Donuts? Or DouGHnuts? Mine sure IS! Beeeecause, these iced donuts are an awesome treat! It took a few batches before I got them right, but, now, they’re definitely winners. Make them as a decadent breakfast, a sweet dessert, or a mid day snack!

Just don’t forget the vanilla glaze. That would be a big…NO… a huge mistake! 👈 Pretty Woman reference. Ob.sessed!

Anywho. The glaze makes the donut, of course, and the whole thing will make your day. Promise.

What do you need to make baked donuts? Here’s the comprehensive list of donut-essential ingredients:

How to Make Cinnamon Donuts with Vanilla Glaze

For the Cinnamon Baked Donuts

For the Vanilla Glaze

Tips for the Best Baked Donuts

Not too difficult of a process, right? Even so, here are a couple of tips that will get you the best results with your cinnamon baked donuts:

Wondering what to serve with your donuts? I generally like to enjoy mine with a big glass of cold milk, a hot cup of latte, or a regular black coffee. You could also sprinkle a little extra cinnamon over the glaze to have a super-cinnamony donut experience.

How to Store Glazed Donuts