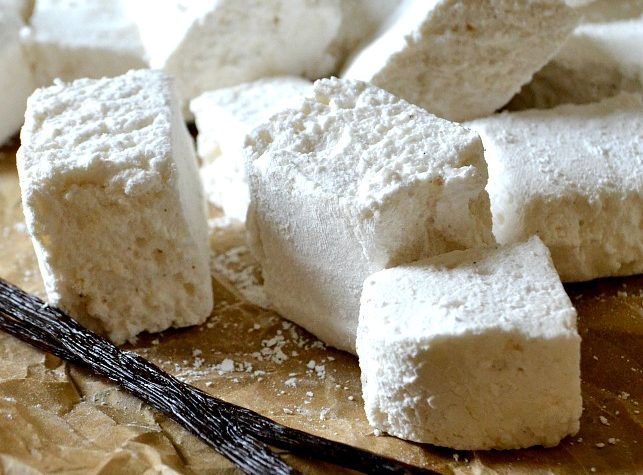 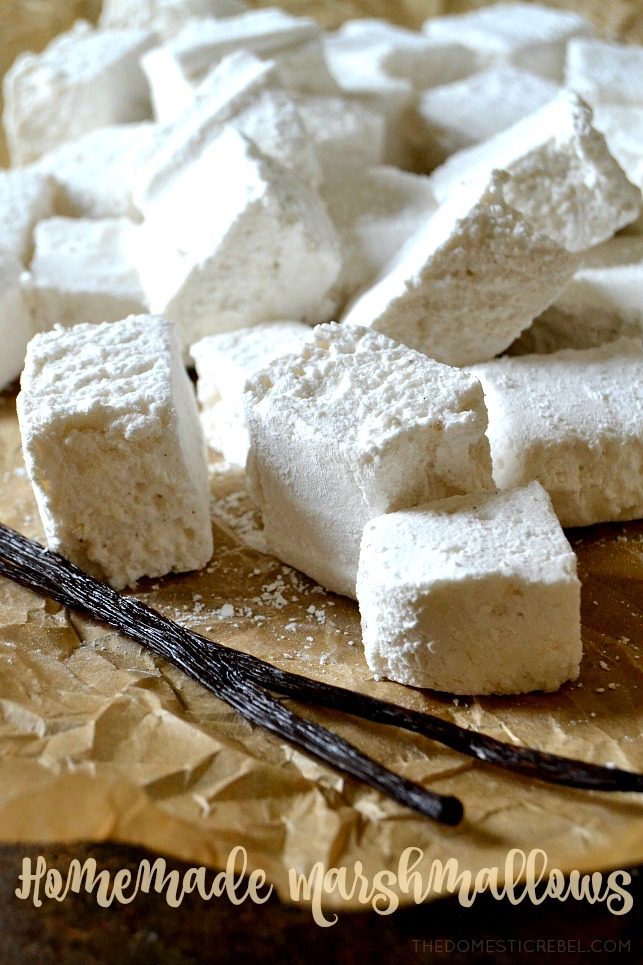 Never again will you want stale, bland marshmallows from the package because my Homemade Vanilla Bean Marshmallows pack a flavor and texture punch! Chewy, soft, pillowy and fluffy, they’re flecked with real vanilla beans in every bite and make for a killer hot cocoa!

Welcome to Day 2 of Homemade Candy Week! I’m so excited to bring you this recipe!

I am a marshmallow fiend in a house historically not a fan of marshmallows.

How I was raised to be the black sheep in this regard, I don’t know… but it probably has something to with the fact that my entire family save for myself must have a genetic mutation that prevents them from loving one of the world’s best candies.

And yes, I consider marshmallows to be a candy… just one that happens to be versatile enough to eat on its own, to fold into Rice Krispie Treats, or to top a steaming mug of hot chocolate.

Besides Rice Krispie Treats, marshmallows are practically existing to be topped in a cup of cocoa, don’t you think? Especially these Homemade Vanilla Bean Marshmallows! Unlike store-bought marshmallows, these melt so beautifully and create this gooey ribbon of vanilla-flecked marshmallows streaming throughout your mug of hot chocolate. It’s kinda magical if you ask me!

The best part is that this recipe is SO simple, even for novice candy bakers. I PROMISE. Now take my hand and let’s walk through homemade marshmallows 101, shall we?

Some marshmallow recipes call for using egg whites, but you can achieve that fluffy, meringue-like texture with gelatin and corn syrup which is easier than separating eggs, wasting yolks, and all that jazz. Plus, I’m just not keen on eating raw egg whites.

First, you’ll mix together some gelatin packets and water in the bowl of a stand mixer. You can also use a handheld electric mixer, but be prepared that you’ll get an arm workout! Let it set for a few minutes while you prepare your sugar syrup. While it sits, the gelatin mixture will set into this gel which serves as the foundation for fluffy, plush marshmallows. 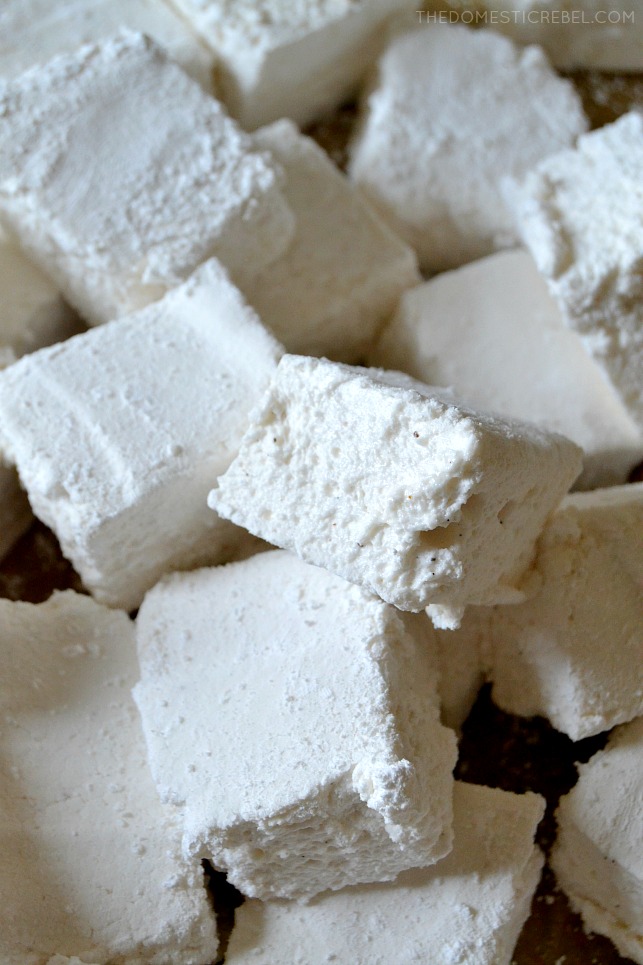 For the sugar syrup, you’ll combine some granulated white sugar with light corn syrup, a pinch of salt, and some more water in a small saucepan. Cook and stir over medium heat until the granulated sugar dissolves, then crank the heat to high and cook the syrup mixture until a candy thermometer reads 240 degrees F, also known as soft ball stage. If you’ve never worked with a candy thermometer before, I know boiling molten sugar can be daunting… but I promise it is simple! The thermometer will do all the hard work for you so you don’t have to pay attention to timers, pay attention to color changes, or drop the mixture into water to see if it threads or balls up or any other antiquated technique. Usually most grocery stores have a candy thermometer for a few bucks too, so they’re easily acquired!

This is where a stand mixer comes in handy – with the mixer on low, you’ll sloooowly stream in the hot sugar syrup mixture into the bowl with the gelatin mixture. Once all the sugar syrup’s been added to the mixer bowl, crank the mixer on high speed and whip until the mixture is very thick and super glossy with stiff peaks, about 8-15 minutes, depending on the power of your stand mixer. Once it’s perfectly thick, stiff and glossy, you’ll mix in your vanilla beans – to make this simple, I love using vanilla bean paste which is a concentrated gel-paste flavored with vanilla beans. It gives the pure, snowy white marshmallows gorgeous brown flecks of vanilla beans which impart such beautiful flavor. 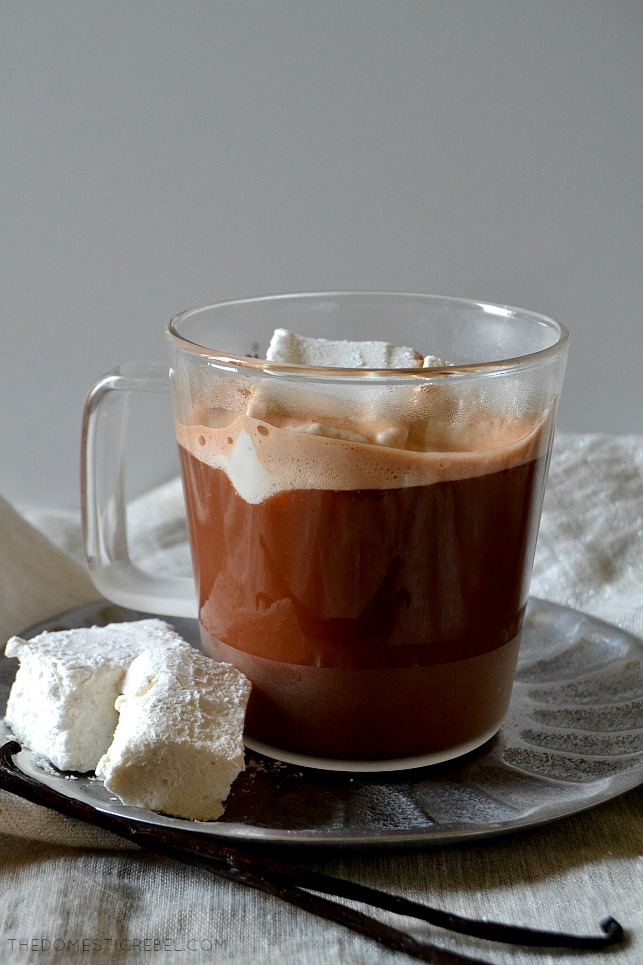 Pour the marshmallow mixture into a 9×13″ cake pan that’s been very generously dusted with confectioners’ sugar. Spread out the top into an even layer, dust with more confectioners’ sugar, and let set UNCOVERED overnight until the marshmallow mixture firms up and dries out slightly. Now, when I say “dries out” I do NOT mean to imply the mixture will be brittle and bland and dry. I just mean that the marshmallow meringue mixture is so wet and sticky that leaving it uncovered overnight allows it to set perfectly so it is way more manageable to cut and handle. 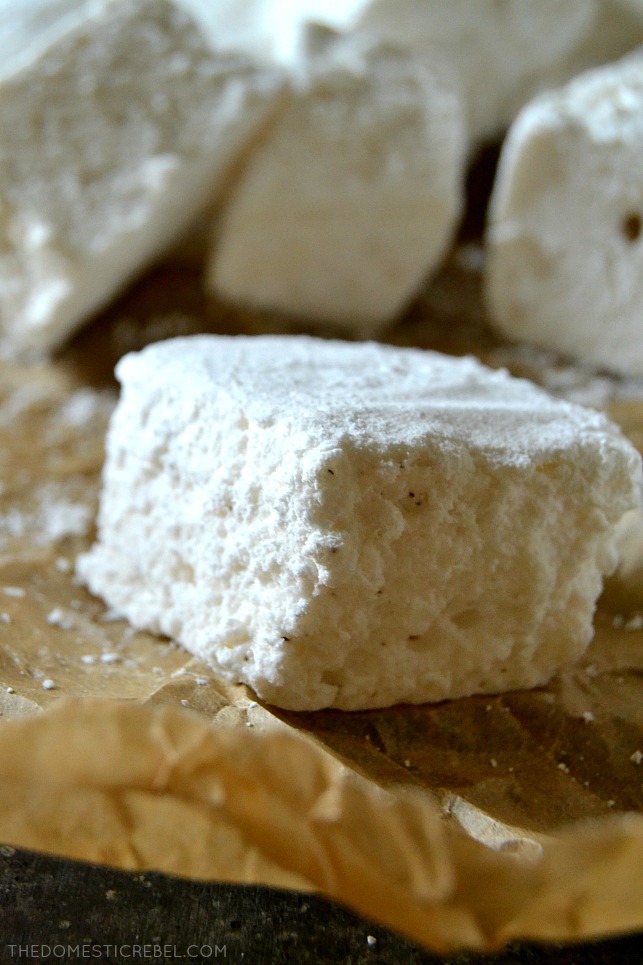 Lastly, cut the marshmallows up with a damp warm knife or a pizza cutter into any size you’d like – I did a pretty nice medium size which yielded me about 35-40 marshmallows. 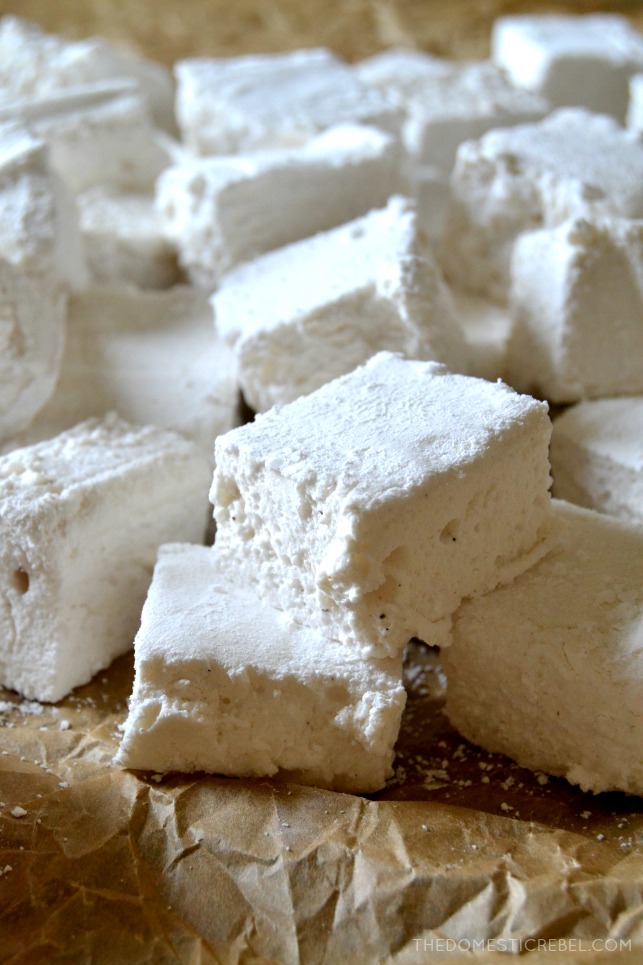 And then prepare to swoon!

These make GREAT holiday gifts – buy a cute mug, tuck in a packet of hot chocolate mix, and a little baggie with a couple of homemade marshmallows – perfect! 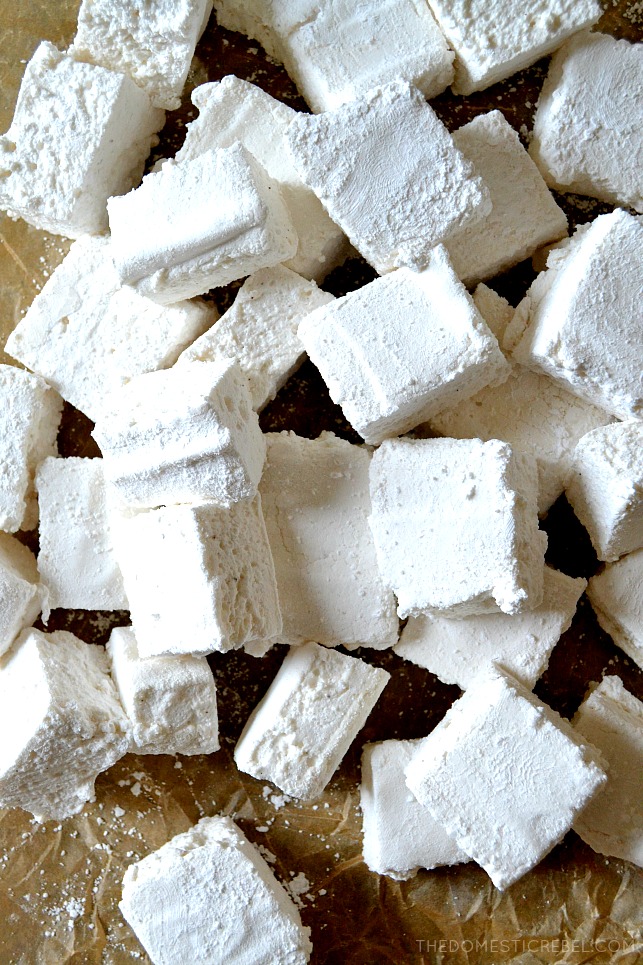 These Easy Homemade Vanilla Bean Marshmallows are SO flavorful, fluffy, soft, and plush with an amazing pillowy texture and flecks of real, aromatic vanilla beans studded in every bite! So heavenly on their own or topped on a steaming mug of hot chocolate! 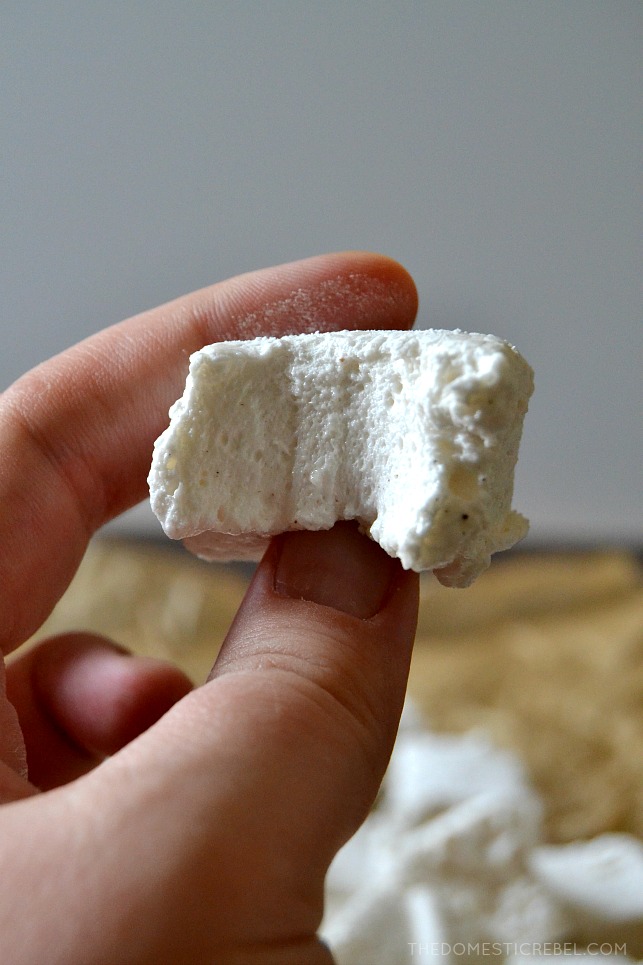 Pillowy, plush, soft and flavorful homemade marshmallows – I can’t get over these! 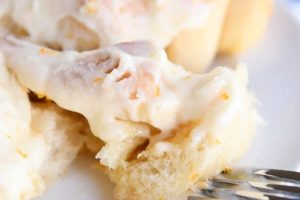 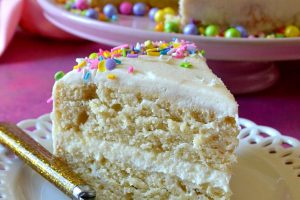 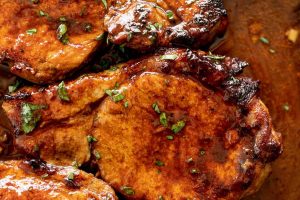 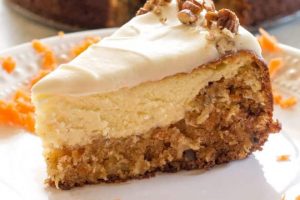 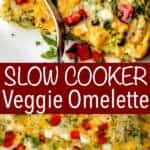 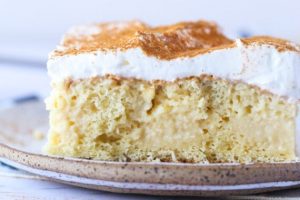 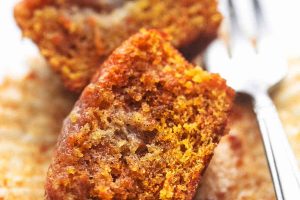 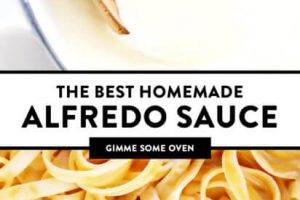 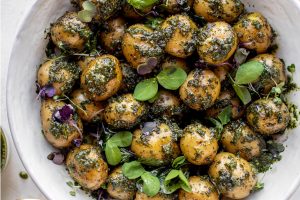 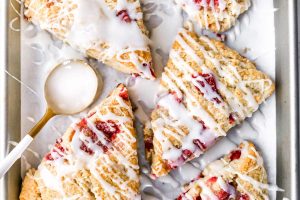 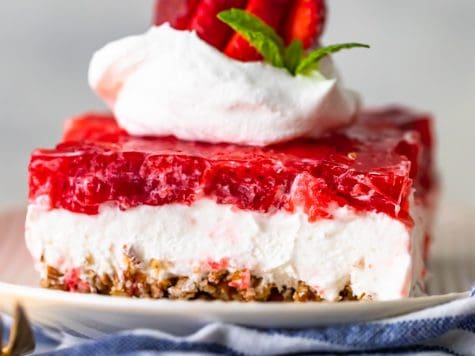 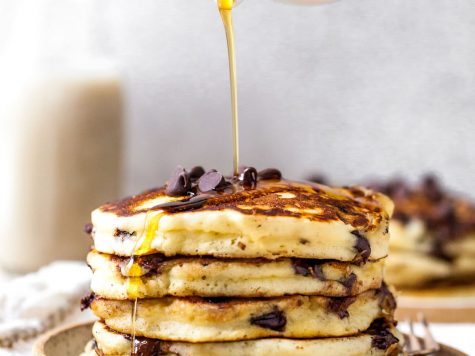 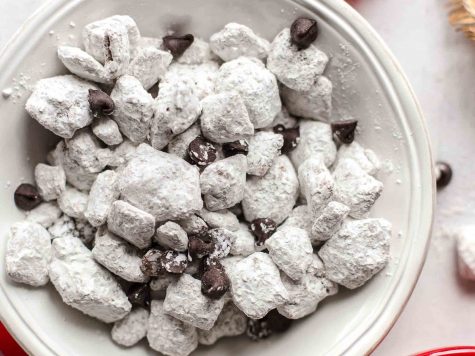 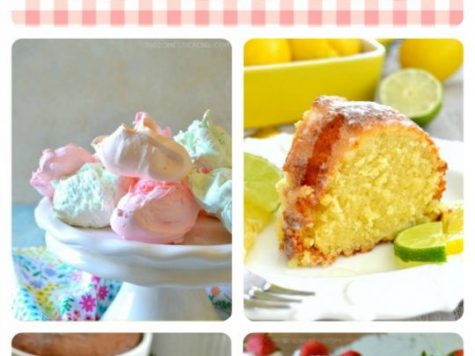 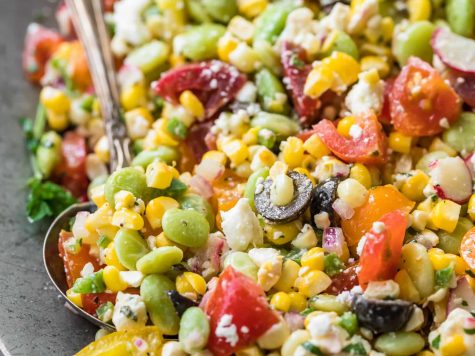