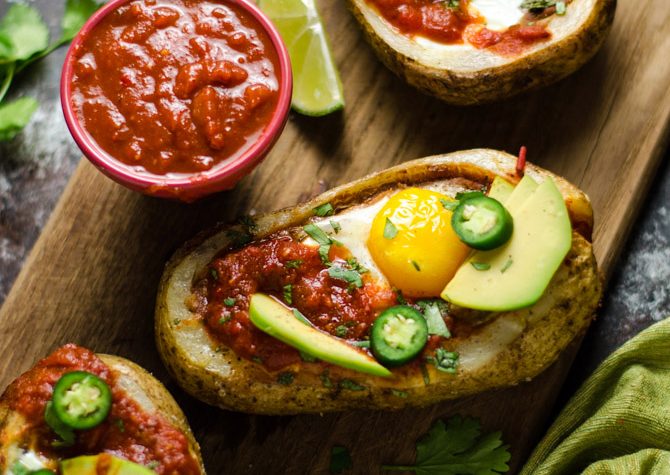 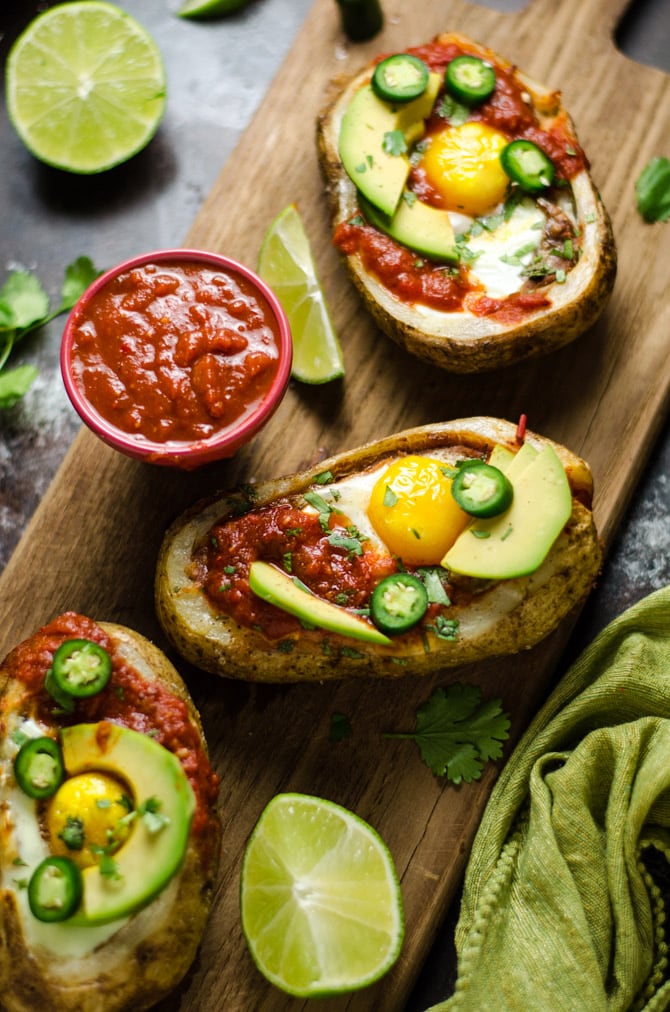 Today, I’m going to teach you how to make an insanely delicious breakfast even though you overslept by like 2 hours. So I guess at this point, it’s actually brunch. Or just lunch. It might even be dinner– and aren’t “second breakfast” and “elevenses” and “afternoon tea” supposed to be thrown in there somewhere?

You know what? You can just eat these 30 Minute Huevos Rancheros Potato Boats whenever you please because it’s 2017 and we should be free of the stressful constraints of specified mealtimes.

Do you feel liberated yet? I do. 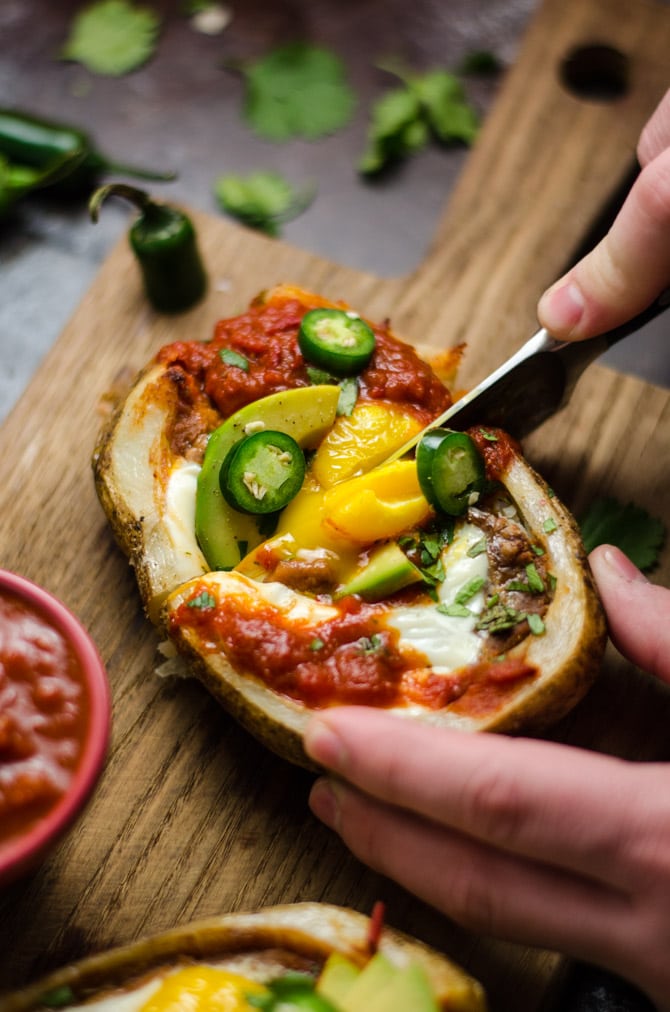 Anyway. What I’ve been trying to say (though I keep getting side-tracked, who’d have thought?) is that I want you to picture Mexican-style breakfast potato skins, loaded up with soft-yolked eggs, refried beans, melted cheddar, crispy potatoes, salsa, and avocado. And now I want you to picture yourself making all of that in only 30 minutes. I’ve got to keep it quick for my fellow last-minute cooks out there.

Impossible, you say? Well, I put the “pro” in “procrastination”, my friend. I can do just about anything in 30 hurried minutes. And honestly, with these potato boats, I don’t even have to rush. 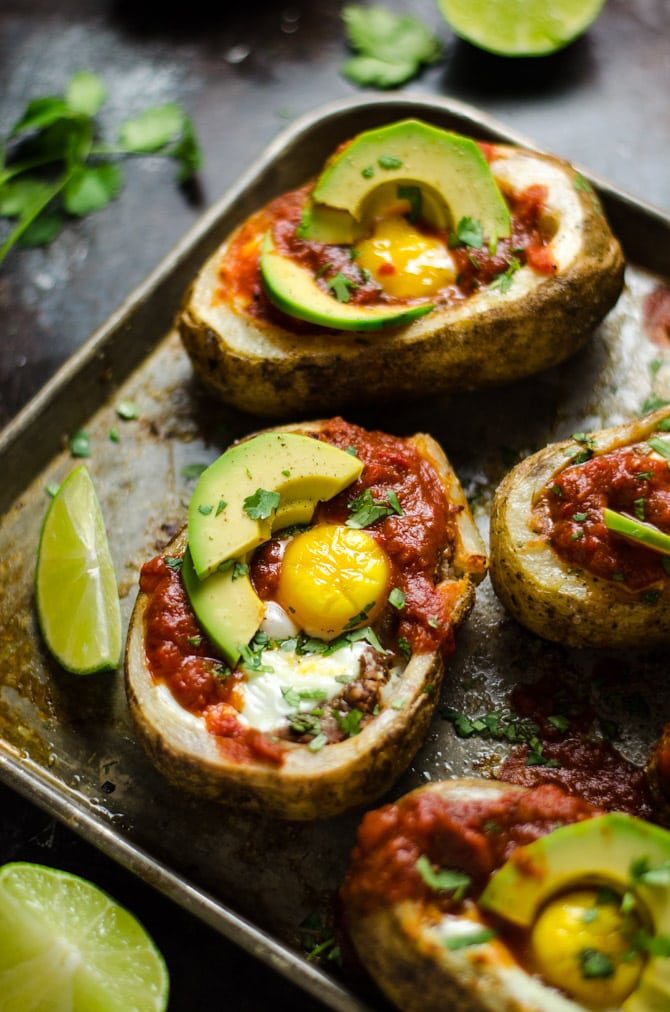 Now I know that baked potatoes typically take about an hour to cook through in the oven, which is a large part of what makes this recipe’s claim hard to believe. However, I take a major shortcut by cooking them in the microwave instead– at least to start. Microwaving cuts a ton of time out, and luckily, in the 12 or so minutes that it takes for the potatoes to cook, I’m able to do most of my prepping to make the rest of the process quick and easy. That’s efficiency.

To create room for all of the filling, I slice off the very tops of the microwaved potatoes and then use a knife and spoon to scoop out the center. You might find that you only need to use a spoon, but I think you have more control over how much potato is left around the edges if you use a paring knife, too. It’s really up to you. As they say, do whatever floats your boat. 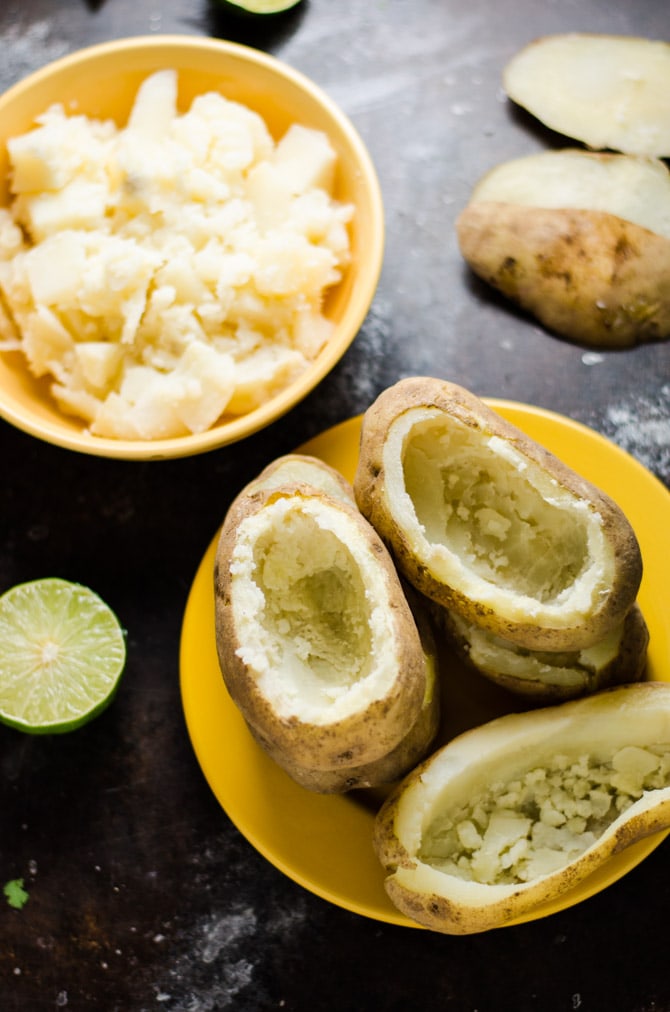 After I hollow out the baked potatoes, I flip them over, brush them with oil, and sprinkle them with salt and pepper. This helps the potatoes to crisp on the outside and ensures that they’re nicely seasoned. Then I turn them back over and place a layer of cheddar cheese in the bottom of each potato boat. Typically, cheddar cheese isn’t used in huevos rancheros, but I love the way the cheese melts, blanketing the potatoes and mixing with the refried beans, egg yolks, and salsa. Mmmmmm.

Huevos rancheros is a breakfast dish that was commonly eaten at Mexican ranches, hence the rancheros part. A standard meal of huevos rancheros includes a fried corn tortilla, fried eggs, and a tomato-chile salsa, usually along with refried beans or Mexican-style rice, and avocado. I’ve replaced the tortilla and rice with a carb I love even more for breakfast– potatoes– and here we are. 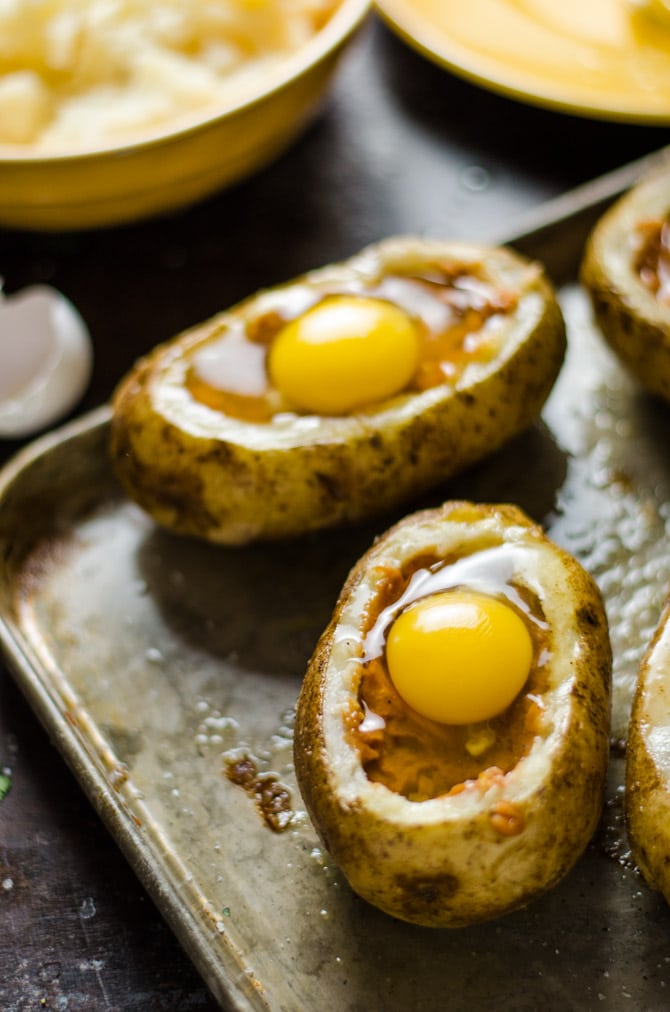 So after I layer on the cheddar cheese, I cover it with refried beans, leaving enough space to fit an egg on top. And then I do just that– crack an egg right on top before sending the 30 Minute Huevos Rancheros Potato Boats off to the oven.

I personally like to cook my eggs so that the yolk is still soft and drippy when cut open. However, if you’re more of a solid-yolk fan yourself, simply cook your Huevos Rancheros Potato Boats slightly longer. For my preferred eggs, I wait just until the whites have set and the potatoes are crispy, which takes about 10 minutes. 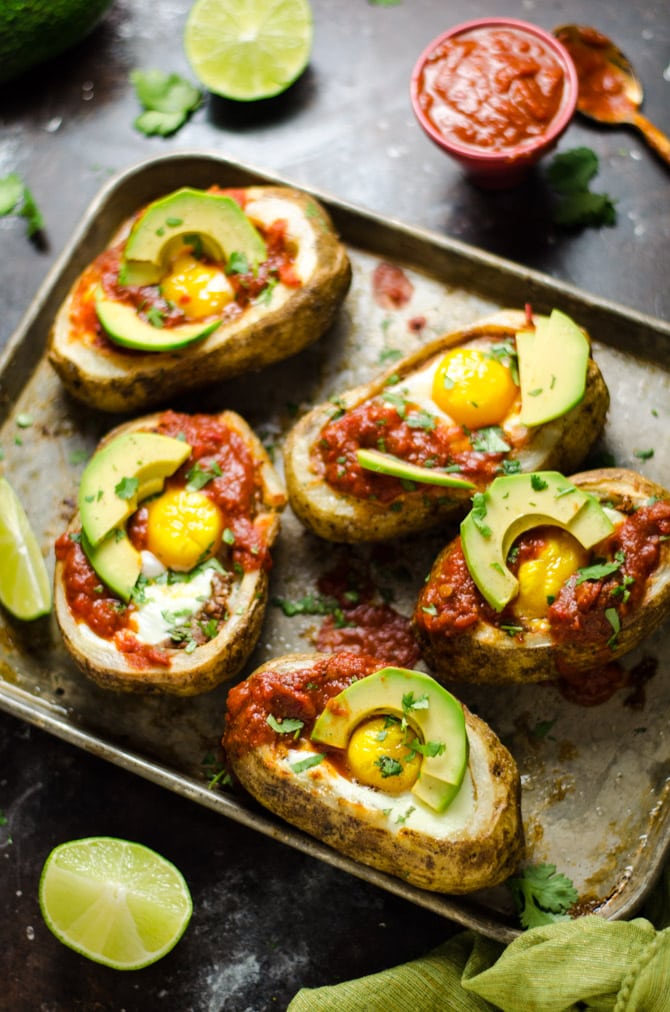 Topped off with salsa, avocado slices, and cilantro, the Huevos Rancheros Potato Boats are just as beautiful as they are delectable, don’t you think. And when you slice into them… 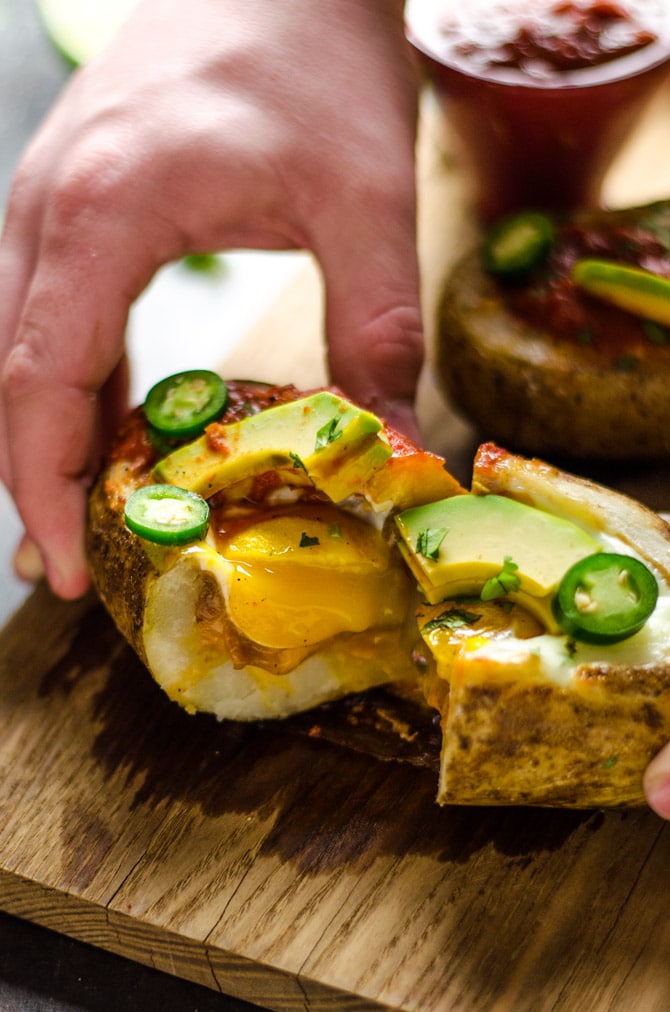 So what are you waiting for? Besides of course, the absolute last second to get started (like I said, kindred spirits). Go make these for your anytime meal and enjoy! But before you dig in, don’t forget to take a photo and tag #hostthetoast on Instagram to show it off. Then go ahead and dig in. 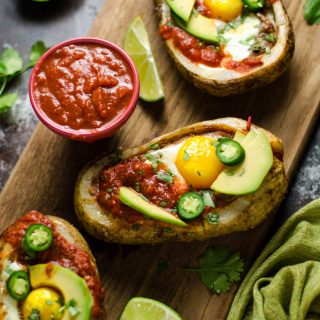 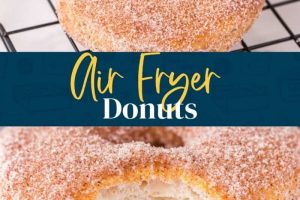 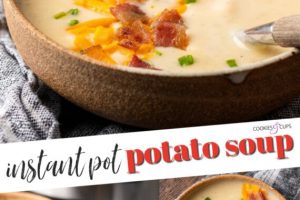 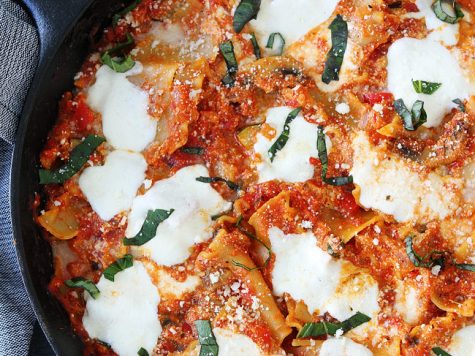 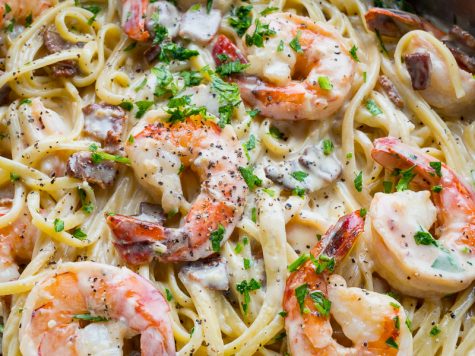 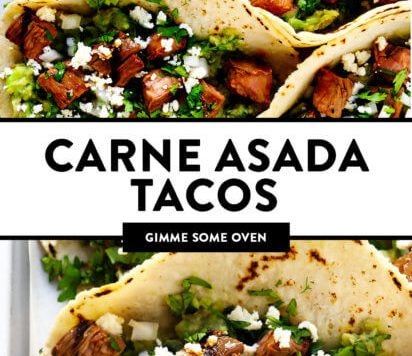 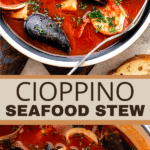 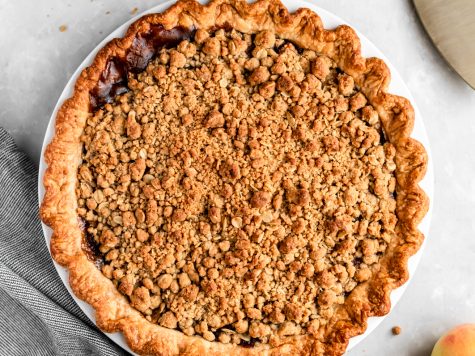