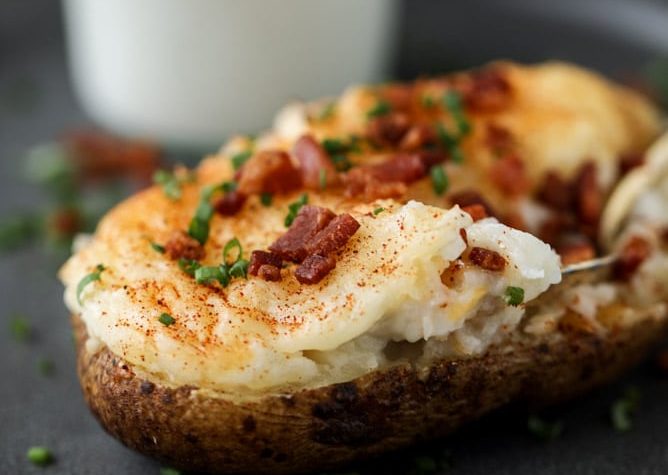 Today we are talking deeeeelish side dishes. 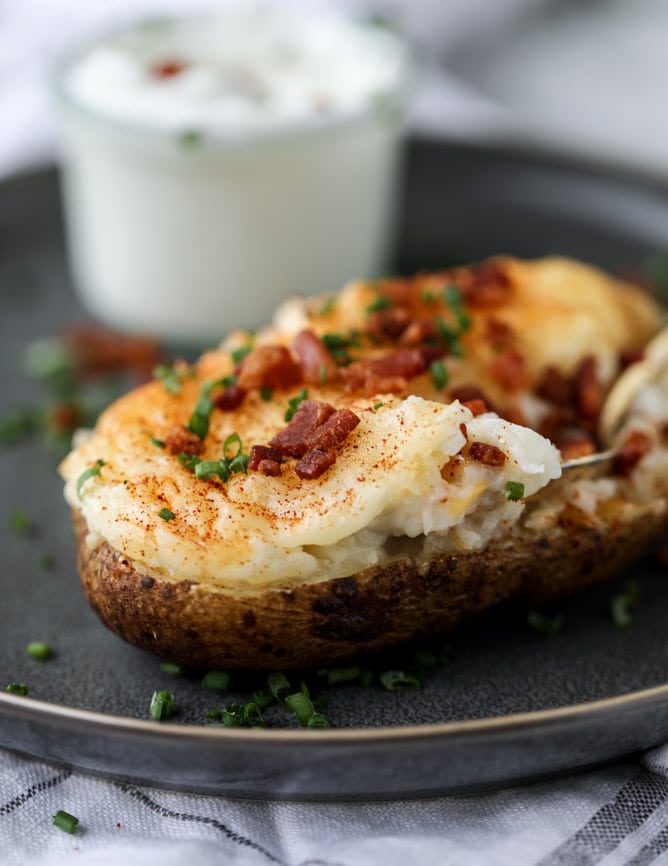 Greek yogurt twice baked potatoes are on the table! And I’m insanely excited to tell you all about them. SUPER EXCITED. Wildly excited! Many moons ago, they were my ultimate favorite food. 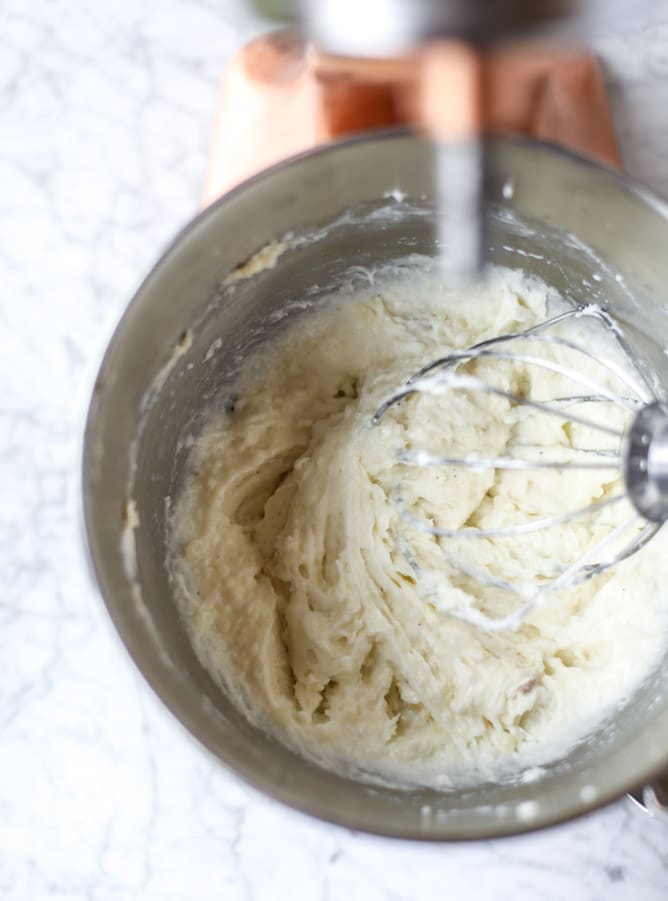 For years, and I do mean YEARS, I have said on this blog that when I was growing up, potatoes were my favorite food. So odd, right? But I loved them in all forms – mashed, baked, casseroles and especially twice baked.

The twice baked were always my favorite. Most likely because of the whipped texture and the cheese topping… of course. Huge shocker.

But also because we’d only have them once per year. My grandma would make them on Christmas day and it wasn’t unusual for me to want a second and maybe even a third (!) serving. Ohhh I loved them so. 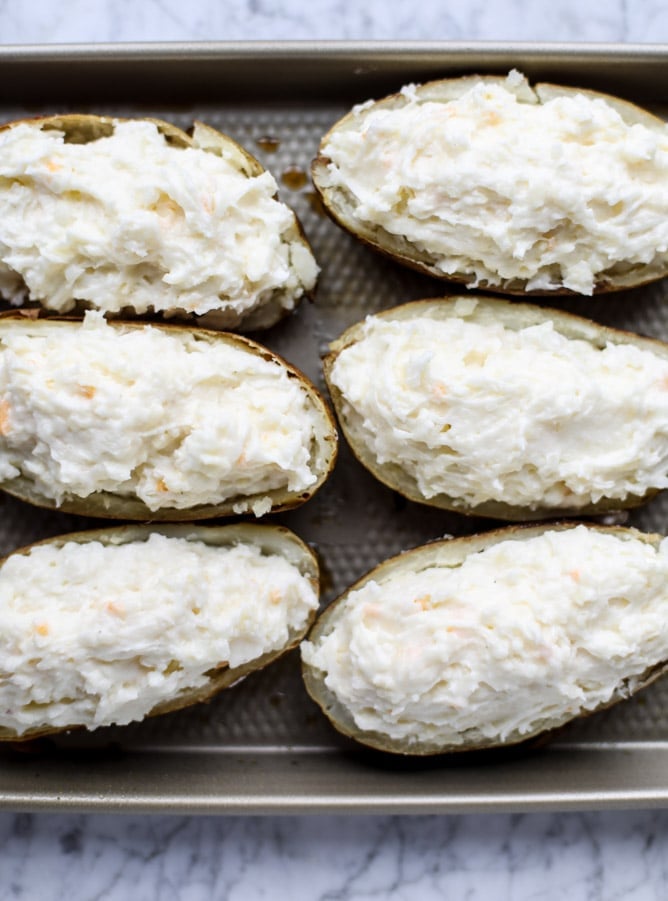 Now here’s why I made them! Our traditional Christmas day menu was always a beef tenderloin and these twice baked potatoes. Green beans were also in there or whatever vegetable popped up on that day, but it was the steak and potatoes that felt super fancy and nostalgic.

I knew I wanted to make both of these things – the steak and the potatoes – to share so you guys could put together a Christmas feast!

SO MANY CHOICES! How do we decide?!

Definitely have to start making these for us on the regular, you know? That solves it. 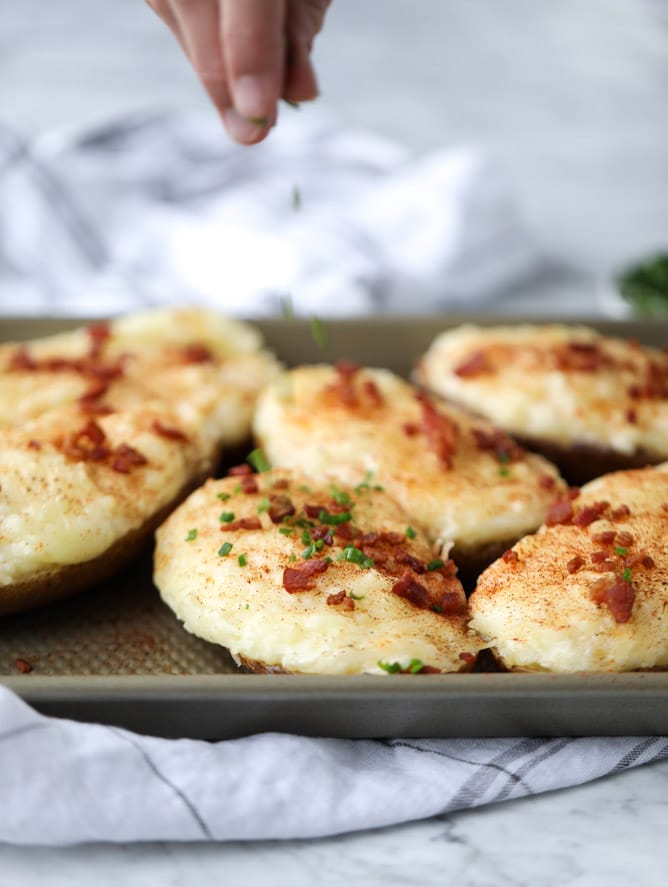 The thing is though.

I rarely make these during the week because they are a calorie bomb. I mean, the REAL reason is also because they require a bit of work, albeit hands off work. Like you have to bake the potatoes, then slice, then whip, then restuff and bake again. Unless you’ve totally planned for it and have the time set aside, it’s difficult to make happen on a weeknight.

Not that we can change the method, but I did manage to lighten these up a bit. As huuuuge fans of greek yogurt in this house, I’ve been using it as sour cream forever. Probably for around ten years.  So it just made total SENSE to whip the yogurt into the potatoes and use less butter and cheese! 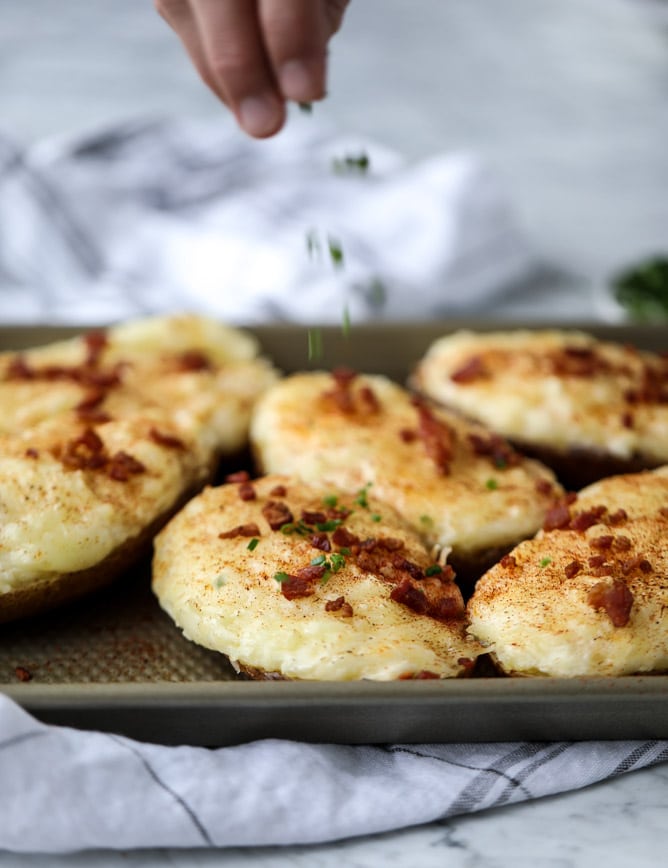 The end result is a super fluffy, whipped, smooth and creamy potato filling for the skin. And let’s talk about that potato skin. I adore it! It gets so crispy and if you add a bit of sea salt… oh my gosh. It’s the best accompaniment to the filling.

In fact, as much as I loved potatoes, I would never touch the potato skin UNLESS it was on twice baked potatoes.

Also. Since we used yogurt here? We can add bacon. Obviously. 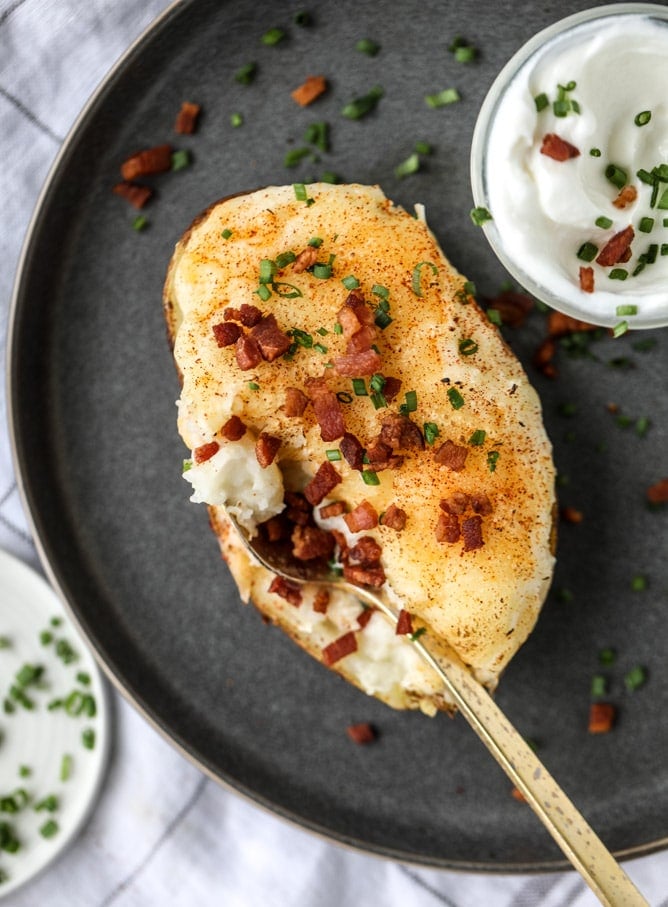 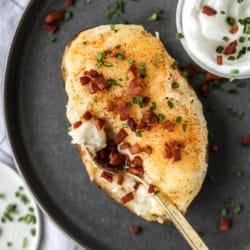 Preheat the oven to 400 degrees F. Poke a few holes in the potatoes with a fork, rub them with the olive oil and place them on a baking sheet. Bake for 1 hour, or until they are cooked through. Remove and let cool slightly.

While the potatoes are baking, heat a skillet over medium heat and fry the bacon. Cook until all the fat is rendered and the bacon is crispy. Remove it with a slotted spoon and place it on a paper towel to drain.

Carefully slice the potatoes in half lengthwise. Scoop out the insides of the potato, leaving the skin in tact. I like to use a serrated (grapefruit) spoon for this. Place the potatoes in the bowl of your electric mixer. Add the greek yogurt, milk and butter. Using the whisk attachment (or beaters), whip the mixture until it’s smooth and creamy. Beat in the cheese, salt and pepper.

Scoop the mixture back into the potato skins. Top with a bit more grated cheddar cheese. Bake for 20 minutes or until the cheesy is slightly golden and the potatoes are warmed through. Remove from the oven and top with the bacon, chives and a sprinkle of smoked paprika. Serve! 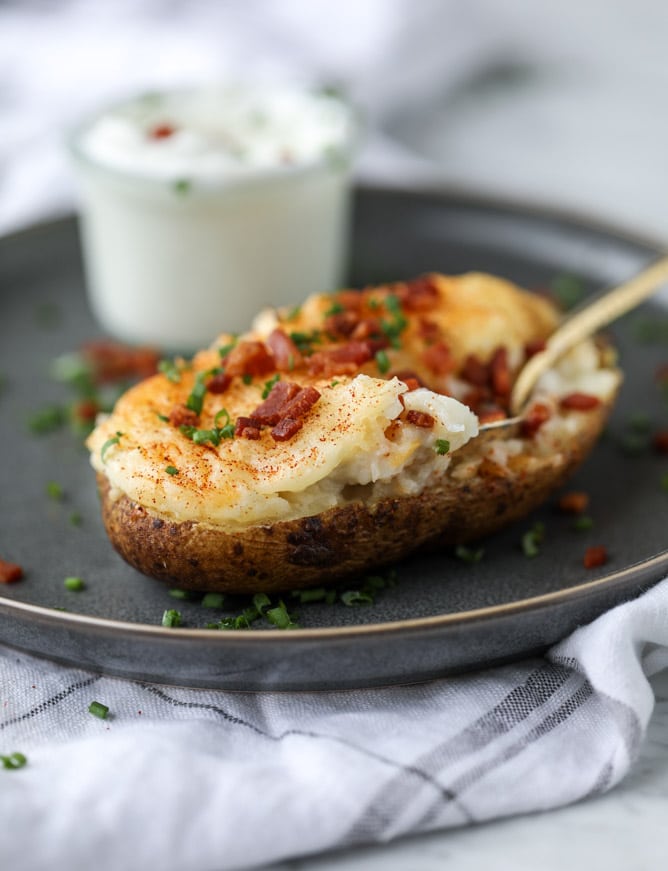 So fluffy I want to die! 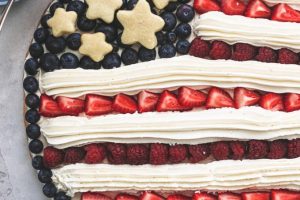 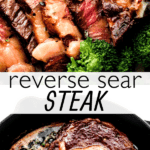 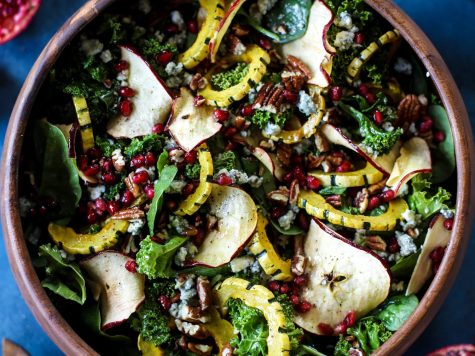 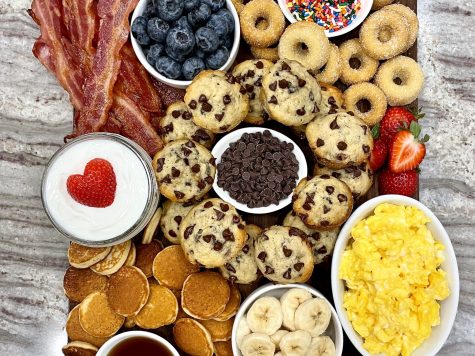 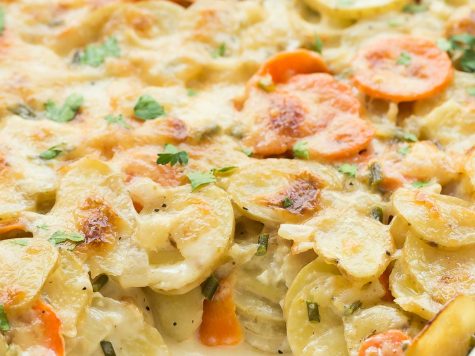 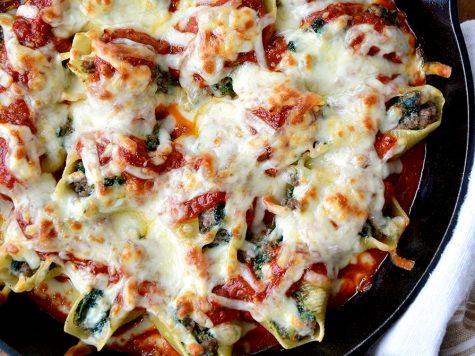 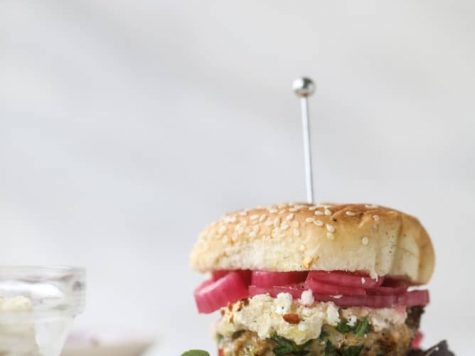