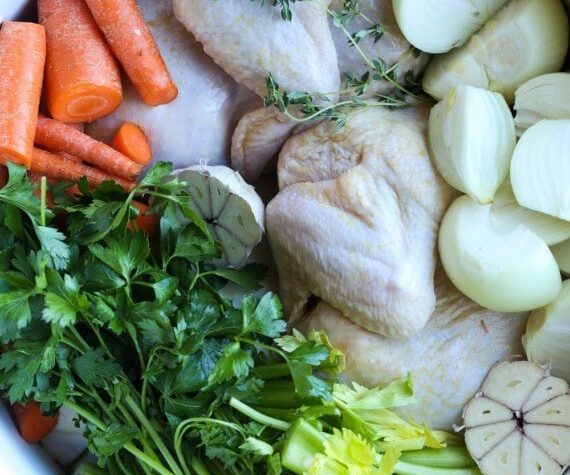 
Homemade Chicken Stock is an absolutely incredible base for making recipes flavor-packed, or even good enough to sip on its own.

Nothing Compares To Homemade Chicken Stock!

I have been making Chicken Stock for years. It’s one of those recipes that I try to make often, but not often enough. Ever since the quarantine began last March we have been making this on repeat. I had always used Ina Garten’s chicken stock recipe, so mine resembles hers, but over the years I have tweaked it to exactly how I like it.

Is Chicken Stock the Same As Chicken Broth?

Broth: Chicken (or any kind of broth) is a liquid that has had meat cooked in it, for example poaching chicken breasts in water with some spices and vegetables with create a broth. Broth is thinner in viscosity, a little lighter in flavor than stock, and is quicker to make!

Stock: Stock is made from simmering meat on the bones (like in this recipe whole chickens) along with veggies and spices. The bones release collagen into the liquid as they cook which adds extra health benefits, but also will give it a gel-like texture when it’s chilled. This can be a little jarring the first time you make it and go to reheat the leftovers, but know that as soon as it’s warmed it becomes liquid once again! The process of creating stock (or bone broth) takes much longer than a broth, which can be done relatively quickly!

Why Doesn’t the Store-bought “Stock” Become Gel In the Box?

I have often wondered this and the only explanation I can find is that the amount of liquid that is used in the mass production of “stock” outweighs the viscosity of the collagen left behind from the bones. This is why homemade is so much more flavorful…because you aren’t watering it down!

Also I will note that good brands of stock will be a little thicker than their broth counterparts, which is good to see from a shelf-stable stock.

You can also find stock in the refrigerated (or frozen) sections of certain supermarkets. These brands are generally more like a homemade stock.

How To Make Chicken Stock:

The steps are super simple, and the prep time is minimal for homemade stock. I’ve outlined it in detail below in the full recipe, but long story short you simply put all your ingredients in a stock pot and boil them uncovered for 4 hours. That’s literally it!

When the four hours is up, remove all the solids, meat and all, from the pot and discard. Then strain the stock using a colander or sieve to strain out all the little bits that remain. I prefer using a mesh sieve, as it strains it better than a colander (the holes are smaller). This makes the clearest, prettiest stock!

What Size Pot Do You Use?

So this recipe makes a large amount of stock. Since it’s an all-day process making it in bulk is nice to do, but yes you do need a large pot. Know that I used to always half the recipe before I found a pot I really liked, making it in a smaller pot. But having a large one is nice.

So many large pots are super tall, which I always hated, but I found THIS POT that I have been using and I love it so much. It’s super pretty, but a really great weight…not too thin and not too thick.

You want to avoid a a very thin-metal pot as it can cause sticking and hot spots in the pan.

But You Really Throw Out All the Ingredients?

I know it seems like a huge waste of ingredients…it was a whole thing I had to come to terms with too.

The vegetables will be very soft and there isn’t a ton you can do with them at this point. The chicken will be very soft as well, maybe to the point of being a little mushy. It’s a texture thing for sure. Everything is SAFE to eat, but it’s just not ideal. I have heard that you can chill the chicken and use it in a chicken salad, which would probably be the best way to use it if you really are opposed to tossing it.

If you don’t want to spend the money on whole chickens to make stock with, you can use a combination of wings, necks, and backs which are generally less expensive.

A lot of fat will come from 3 whole chickens, and you don’t need this for flavor in your stock. Here’s how I like to remove the fat:

What Can You Make With Chicken Stock?

Besides the obvious, Chicken Noodle Soup, just sipping it by itself (delish!), in gravy, or to replace water in rice or pasta dishes, here are a few more of my recipes that use chicken broth/stock. And like I mentioned above, stock and broth can be used interchangeably, so whenever you see chicken broth listed as an ingredient, use this homemade stock instead. It makes a HUGE impact!

This recipe makes a lot of stock, about 6-quarts. You can portion it out and store it in airtight containers or zip-top bags to refrigerate (for up to 3 days) or freeze for later use (I recommend 30 days for best taste, but it will be safe to eat for up to 3 months.)

I like to store it in 2 cup portions. The boxes you buy at the store generally contain 4 cups, so if you find yourself using that much regularly, you can portion it out in large quantities. I just always find that I use stock or broth in 1 or 2 cup amounts.

If you are planning to use this only for soup, obviously storing it in larger container would work best!

I have even seen people freezing the stock into ice cube trays. This would be great when you need very small amounts of broth, or even like to use it to enhance dog food!

Like I said above, the chilled stock will be like gelatin. This is due to the collagen from the bones. As soon as you heat the stock it will become liquid again, so don’t let this worry you! The gelatin lets you know you have a ton of collagen in your stock, which is offer tons of health benefits regarding your bones, skin, hair, muscles, tendons, and ligaments. Definitely take the time to research the benefits of bone broth!